Editors’ note: our thanks to David J. Skorton, President, Cornell University, for his informative and thought provoking response below to Nigel Thrift’s ‘A question (about universities, global challenges, and an organizational, ethical dilemma)‘. David J. Skorton (pictured to the right) became Cornell University’s 12th president on July 1, 2006. He holds faculty appointments as professor in the Departments of Medicine and Pediatrics at Weill Cornell Medical College in New York City and in Biomedical Engineering at the College of Engineering on Cornell’s Ithaca campus. He is also chair of the Business–Higher Education Forum, an independent, non-profit organization of Fortune 500 CEOs, leaders of colleges and universities, and foundation executives; life member of the Council on Foreign Relations; co-chair of the advisory board for the Africa-U.S. Higher Education Initiative of the Association of Public and Land-Grant Universities; member of the National Advisory Council for the National Institute of Biomedical Imaging and Bioengineering of the National Institutes of Health; and Master of the American College of Cardiology.

As our regular readers know Professor Nigel Thrift, Vice Chancellor of the University of Warwick, contributed an entry where he posed: ‘A question (about universities, global challenges, and an organizational, ethical dilemma)’. Professor Skorton’s response below is the third response to Nigel Thrift’s ‘question’. The first two were provided by Peter N. Stearns, Provost of George Mason University, and Gregor McLennan, Professor of Sociology and Director of the Institute of Advanced Studies, University of Bristol.

Several more responses are in the works, and others can be proposed (via <kolds@wisc.edu>) through to April 2011.

My British colleague Nigel Thrift asks if we should be bothered by our role as universities in the “long emergency” of global suffering and deterioration, whether it be through climate change, hunger, poverty or disease [‘A question (about universities, global challenges, and an organizational, ethical dilemma)‘, April 8, 2010]. He says, “Yes, we should,” and I fully agree with him.

By any measure, the facts go beyond the alarming: World Bank socioeconomic indicators show a high level of human misery, from extreme poverty to child malnutrition, particularly in those countries suffering from armed conflict. More than 1 billion people lack access to potable water, and 42 percent of the world’s population–that’s 2.6 billion people–don’t have access to proper sanitation. More than 10 million children under the age of 5 die every year from causes that would be preventable with better nutrition and access to health care.

Clearly, universities in the developed world have a major role to play in alleviating this human suffering. This is especially true in the United States, where universities traditionally have carried out a three-part mission of teaching, research, and outreach and service to the larger world.

Nigel talks about our intellectual and ethical responsibilities and the need for decisive action. Those reasons are splendidly altruistic and well-stated. As an American, I would add a further reason to act: higher education is one of the most effective and credible diplomatic assets available to the United States. Before my overseas colleagues cringe in dismay, let me add that I am in no way advocating that higher education be utilized for political gain or advantage. But I do contend that colleges and universities are among our country’s best tools to build human and societal capacity and foster positive international relations in a world in which the United States is being challenged economically as well as on religious, moral and ideological grounds. The global participation of our universities can help alleviate poverty and create a pathway for millions to improve their own lives and enter an increasingly globalized society. Moreover, we in higher education in the United States need to engage the world in order to educate American students to function in a global economy and to address common problems from global outbreaks of new infectious diseases to climate change.

Many universities in the United States and other developed countries, the United Kingdom included, are already reaching out to and establishing partnerships with institutions in the developing world. Cornell is high on the list of those participating in this effort, particularly in coming to the aid of the overburdened higher-education infrastructure in Africa. In 2007, for example, Cornell established a master’s of professional studies degree program in international agriculture, with emphasis on watershed management, in Ethiopia in partnership with Bahir Dar University. In addition, our Weill Cornell Medical College is working to strengthen medical education at the Weill Bugando University College of Health Sciences and at Bugando Medical Centre in Mwanza, Tanzania, in order to improve and expand Tanzania’s core of health-care providers. We need many, many more initiatives like these to directly confront the issues of world poverty, illiteracy, hunger, disease, and societal dysfunction.

Nigel notes that “perhaps it could be argued that we are now on a kind of war footing and need to act accordingly,” and I have described the international situation as “explosive.” But what is needed is not so much a warlike stance as a long-term commitment to address problems that have seemed intractable for at least half a century.

Nearly three years ago I proposed the creation of a new Marshall Plan for higher education that would enlist colleges and universities in fulfilling their potential as educators, developers and researchers for the world. What would such a plan achieve? First, colleges and universities need to coordinate our efforts at capacity-building in the developing world, and by that I mean developing a new kind of plan that would enable us to work together on education, research, and outreach. Second, we need to make sure our efforts complement the current work by nongovernmental organizations, foundations, and by government agencies in confronting the issues of literacy, nutrition, global health, sustainable technologies and conflict resolution, among others. And third, we need to follow the lead of our colleagues in the developing world who are most knowledgeable about local needs and the cultural, social, and political contexts within which projects and programs must operate.

A major thrust must also be to make higher education available to the growing number of students in the developing world with few options to pursue postsecondary education. As I have written before: We cannot handle tomorrow’s students and the demands for advanced skills with the resources that exist today.

Just as U.S. Secretary of State George C. Marshall’s 1947 proposal for a massive program of aid and redevelopment helped bring a war-ravaged Europe back to economic health, political stability and peace, an enlightened, coordinated, and broad-based plan could greatly benefit the developing world today.

Is such a plan feasible today, given the much wider global community? I sincerely hope so, and I am also hopeful that as more and more of our research universities reach out globally, they will see that the stakes are even higher now than they were six decades ago. The appalling conditions faced by vast numbers of the world’s people create a humanitarian crisis of the first order and, as such, a threat not only to stability and intercultural understanding, but also to peace.

But, Nigel asks, are universities “optimally organized” to address these fundamental global challenges? “Optimally organized” is elusive and must be defined on a local basis. However, based on past and present action, I can certainly answer for Cornell, which has a long history of international research and capacity building. The Cornell-Nanking Crop Improvement Program, a cooperative agricultural exchange program, was carried out in China between 1925 and 1931 to improve the major food crops of northern China and train Chinese investigators in crop-improvement techniques. That effort paved the way for many post-World War II technical assistance programs involving American universities and their counterparts overseas. 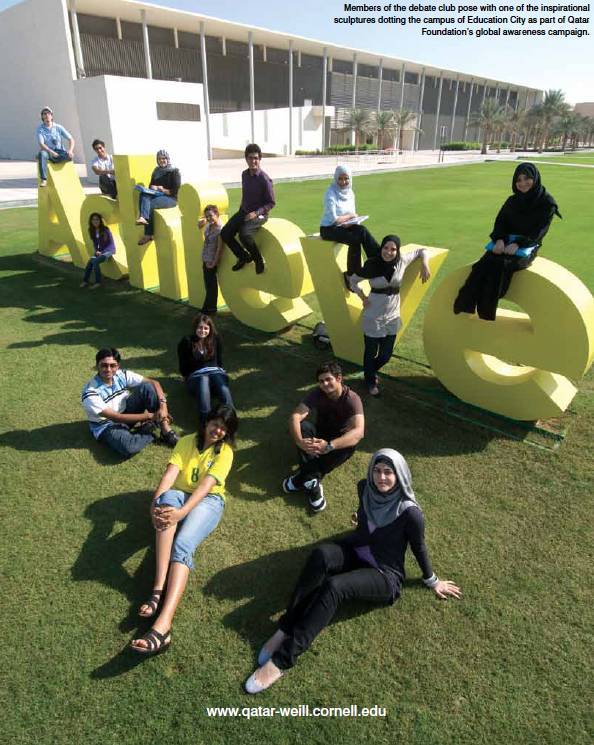 We, and many of our peer institutions, have long regarded ourselves as international universities, and ever more institutions in the United States understand that they need to engage the world by educating American students to function in a global economy by exposing them to the breadth of world cultures. These students quickly find that collaboration across national borders often is the most effective way to attack a variety of research problems and to build human and institutional capacity in the developing world.

One thing is apparent: No single college or university, acting alone, can achieve what is needed to solve global society’s growing ills. Working together, however, the research institutions of the United States and the rest of the developed world, in cooperation with those already in the field and in local leadership positions, can play a central role in helping countries that are struggling to meet the needs of their citizens. Acting together, we can improve local education, apply research and contribute our problem-solving skills.

The world increasingly is turning to higher education to develop and share the knowledge needed to solve its most critical problems, which know no disciplinary or national boundaries. In a 2007 essay I wrote that the development of human capacity is not only one of the most effective ways to ameliorate global inequality, it is a prerequisite for any enduring improvement of the standard of living at the local level, where it counts most. In 2010, with income inequality between the richest and poorest nations ever more pronounced, that is assuredly more certain than ever.

I firmly believe that the current global milieu – especially the frictions, fears and misunderstandings between cultures – requires responses that universities are uniquely qualified to supply: dialogue, learning, creativity and discovery. And that’s not only good for America and its friends – it’s good for the world.

6 thoughts on “A Cornell University response to ‘A question (about universities, global challenges, and an organizational-ethical dilemma)’”