Note: this entry is also available via Inside Higher Ed here.

Over the last several years, it has been interesting to see the development of some new and relatively deep collaborative models of institutional (or ‘commercial,’ using GATS parlance) presence in territories outside of universities’ main campuses. These new models tend to be research- and graduate or professional education-oriented, with relatively strong interdisciplinary inclinations. Some examples include:

These new models are formal joint ventures (in full, or in a significant way) vs stand-alone branch campuses; they involve significant medium-term commitment and investment; they are associated with the development of new purpose-designed buildings and broader institutional infrastructure; they involve the creation of new governance and organizational structures; they involve a concerted effort to produce innovative forms of new knowledge, impact, and sometimes service; and they are located in global cities.

While there are 250+ branch campuses around the world, including somewhat similar models (e.g., the campuses at Education City in Qatar), as well as dozens of international university research ventures (IURVs), the above developments are not as singularly research-oriented as those described by the Georgia Tech team several of us engaged with at a 2016 workshop on IURVs. Rather, the above examples differ from typical branch campuses and IURVs given their graduate/professional education focus, their intertwined research and education agendas, and especially the de jure nature of the joint venture structure that exists on multiple levels.

For some ideas on thinking through the complex nature of deep internationalization associated with these developments, I think it’s worth turning to Gabriel Hawawini‘s recent book The Internationalization of Higher Education and Business Schools: A Critical Review (Springer, 2016). Hawawini is a professor of finance and former dean of INSEAD (2000-2006). He is the key architect of INSEAD’s highly successful transformation into a genuine international business school via a strategic planning process that spurred on INSEAD to refashion its organizational structure in a manner that led to to the development of commercial presence in Asia (in Singapore) and the Middle East (in Abu Dhabi). Now while INSEAD did not adopt the above joint venture via physical infrastructure model, the thought process behind their multi-campus model is still relevant, hence my argument that leaders and analysts interested in options for deep internationalization strategies should read Hawawini’s book. I also referred to aspects his argument in a recent course I taught on Cities, Universities and the Development Process and found that the framework Hawawini developed is clear and coherent to those new to the internationalization of higher education debate. Of course his is a business school-derived perspective but it’s a remarkably clear headed one that can be usefully used to foment debate and decision making regardless of the nature of the higher education institution as it is derived out of an actual (vs hypothetical) strategic planning process that led to positive and sustainable outcomes for INSEAD (and Singapore). And it’s a book that, despite the title, is more about the internationalization of higher education institutions than business schools.

What I like about Hawawini’s argument is that he wears an institutional political economy hat when thinking about internationalization of higher education. By this I mean he is cognizant of the role of different types of firms and states, as well as variable state-society-economy relations, in shaping the modern knowledge economy. This is a geographically uneven economy, and a very urban one (a theme raised last week in an interesting article by Emily Badger in the New York Times). Given this, and given Hawawini’s role as a higher education decision-maker and leader, he confronts what this evolving context means for higher education institutions that are grappling with the internationalization challenge.

In this short book, Hawawini first outlines what he defines as internationalization (p. 5):

Internationalization is an ongoing process of change whose objective is to integrate the institution and its key stakeholders (its students and faculty) into the emerging global knowledge economy. 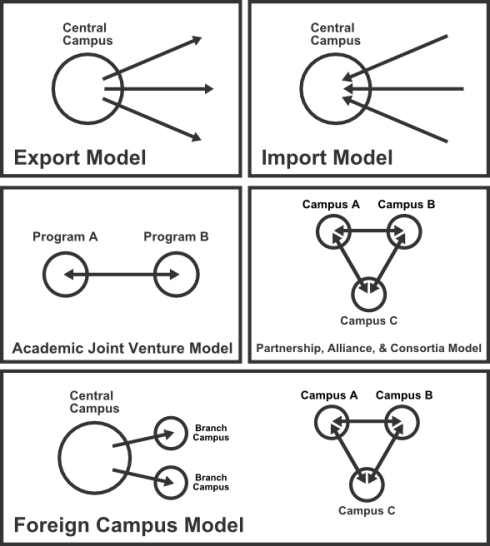 Further to the above models, Hawawini makes the critically important point that the dominant model (the Import model) adopted by most Western universities, including public research universities, is becoming increasingly problematic with respect to the production of regionally and globally relevant knowledge, not to mention educational programming. Why? Economic growth, infrastructure, global production/value chains, and so on are binding together cities and regions, with some regions (e.g., Pacific Asia, the Gulf) developing as much more important and powerful spaces in their own right. Thus the creation of solely- or jointly-developed institutional infrastructure in key nodal cities is required to adequately understand what is happening within these regions, how cities and regions are being bound together, and what is needed to develop and circulate relevant forms of knowledge. As Hawawini puts it (pp. 25-26):

An alternative view is that the global economy is being transformed into an increasingly complex network of interconnected but different economic areas each of which is endowed with the capacity to innovate and create knowledge. According to this multipolar view of the world, knowledge is increasingly being dispersed throughout the globe. In this case learning from the world becomes an imperative, particularly for research-driven higher education institutions. This is why higher education institutions should be present abroad: they need to acquire that dispersed knowledge and meld it together to create new ideas and more advanced knowledge.

Shifts in the spatial structure of economic activity, as well as in emerging growth patterns, are creating new regional economic geographies and political economies and if this is the case, sitting back and resting upon past laurels is not enough IF a university seeks to become a “truly global institution” (p. 76). Committed and aspiring global institutions need to refashion their organizational structures to ensure they can realize their visions and generate an impact. This is, arguably, a key part of the rationale for why four of these eight institutions (Technion, Tsinghua, Duke, Imperial College) have taken the big step and allocated considerable time, effort and resources to developing a formal institutional presence in the cities of New York, Seattle and Singapore. Each university needs to be located within these cities and each has contributed to the development of the infrastructure (broadly defined) needed to become more regionally and globally relevant. They are, as Hawawini puts it, internationalizing “to learn from the world” in order to “create knowledge” in an increasingly “multipolar world.”

While Gabriel Hawawini’s book does have many strengths, I recommend that it be read in conjunction with other books and articles that focus on particular geographies and sectors. For example, in my Cities, Universities and the Development Process course I assigned Aihwa Ong’s excellent book Fungible Life: Experiment in the Asian City of Life (Duke University Press, 2016) which focuses on Singapore and the leading edges of bioscience. As the book description states:

In Fungible Life Aihwa Ong explores the dynamic world of cutting-edge bioscience research, offering critical insights into the complex ways Asian bioscientific worlds and cosmopolitan sciences are entangled in a tropical environment brimming with the threat of emergent diseases. At biomedical centers in Singapore and China scientists map genetic variants, disease risks, and biomarkers, mobilizing ethnicized “Asian” bodies and health data for genomic research. Their differentiation between Chinese, Indian, and Malay DNA makes fungible Singapore’s ethnic-stratified databases that come to “represent” majority populations in Asia. By deploying genomic science as a public good, researchers reconfigure the relationships between objects, peoples, and spaces, thus rendering “Asia” itself as a shifting entity. In Ong’s analysis, Asia emerges as a richly layered mode of entanglements, where the population’s genetic pasts, anxieties and hopes, shared genetic weaknesses, and embattled genetic futures intersect. Furthermore, her illustration of the contrasting methods and goals of the Biopolis biomedical center in Singapore and BGI Genomics in China raises questions about the future direction of cosmopolitan science in Asia and beyond.

Ong’s book is a deep dive in the complex role of the state, universities, firms, research stars, and knowledge about genetics in shaping the development of Singapore, in particular, as a key space in the development of scientific knowledge. After reading it you can better understand why universities like Duke and Imperial College seek (and need) to have a formal institutional presence in Singapore, and in association with key national partner universities like NUS and NTU. The Ong book, thus, provides insights on the geographical-, historical-, and sectoral -specific developments that these universities are currently navigating.  The Ong book has its weaknesses, but this is not the space for this discussion.

Clearly not all universities have the ambition, connections, stature, and resources to refashion their organizational structures to help enable deep internationalization. This is, of course, fine. As Hawawini puts it (pp. 76):

In the light of this conclusion, I believe that most higher education institutions should refrain from claiming their aim is to become truly global institutions.

He argues that “most higher education institutions are firmly grounded in their local and regional environments” and given this it is illogical to seriously pursue the kind of development initiative evident in the case of, for example, Duke-NUS Medical School in Singapore. There are plenty of alternative mechanisms, including student/staff/faculty exchanges, partnerships, and curricular transformations (internationalizing the curriculum & internationalization at home). For the ambitious or curious, though, it’s worth reflecting on these experiments in deep internationalization via the development of outward-facing forms of city-based infrastructure.