Over the last decade some noteworthy initiatives have emerged within the US to remake science and engineering degree structures and offerings, often with a focus on speeding up the time to graduation, enhancing and broadening the skill make-up of graduates, and building deeper information channels between academia and industry. Yesterday’s Washington Post had an insightful article on just these themes – the emerging professional science master’s degree (PSM). As the Washington Post notes:

The PSM program is designed to provide more advanced training in science or mathematics — with a dose of business skills — and entice more students who receive bachelor of science degrees to stay in the field without having to pursue a doctorate. Most college graduates with four-year science degrees leave the field and don’t return.

The PSM degree, sometimes described as a science version of the MBA degree, is being hailed as one of the most promising innovations in graduate education in years.

The Washington Post article profiles PSM-related initiatives created to date at Washington DC-based universities including George Washington University, Towson University, American University, the University of Maryland, Georgetown University, Virginia Tech, and Virginia Commonwealth University in Richmond. The article notes that “about 1,300 students are enrolled in PSM programs at more than 50 schools nationwide”, with the Washington area base region for “the most programs”.

From a non-US or international comparative perspective, one dimension of the development process that is worth noting is the critically important role of independent non-profit foundations to spurring on initiatives and innovation in higher education. As hinted at above, the PSM is largely an outgrowth of the effort of the Alfred P. Sloan Foundation to enhance and broaden the skill make-up of science and engineering graduates (especially at the below PhD level), and build deeper information channels between academia and industry. As Michael S. Teitelbaum, Vice President, Alfred P. Sloan Foundation, stated in a 6 November 2007 testimony before the Subcommittee on Technology and Innovation, Committee on Science and Technology, U.S. House of Representatives, the US needs to do a better job of improving the:

“signals” about such careers that are publicly available to prospective students. In particular, doctoral programs in many U.S. universities provide far less information to prospective and entering students about the career experiences of their recent graduates than do the law schools and business schools on the very same campuses. This should certainly change; students need to be provided with far better if they are to have realistic expectations as they embark upon a course of graduate study and postdoc research that often can stretch out over most of their 20s.

Universities and disciplines are, despite their reputations in conservative political circles, notoriously risk averse and slow to innovate with respect to course and degree offerings. The Alfred P. Sloan Foundation, which was established in 1893, created the PSM program in 1997 during a period of considerable debate about America’s perceived knowledge deficit (which eventually fueled the creation of the polemical study Rising Above The Gathering Storm: Energizing and Employing America for a Brighter Economic Future Committee on Prospering in the Global Economy of the 21st Century: An Agenda for American Science and Technology). The ultimate impetus for the PSM, however, seems to be Sloan’s considerably more nuanced concern about the quality of science and engineering education versus the number of science and engineering doctoral graduates. See Teitelbaum’s informative testimony for further information on this issue.

Further information on the background to the PSM is available here, while a PSM locations map (with links to specific programs) is available here. A screen capture of the map below clearly highlights the geography of the PSM. 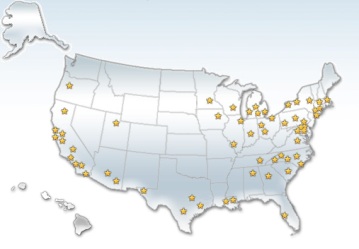 Ten years on since its establishment the PSM has taken off. Indeed primary responsibility for institutionalizing the PSM is now in the hands of the Council of Graduate Schools (CGS). It is worth noting, however, that the Washington Post article states that “[l]ast year, Congress provided funding for schools to establish or improve PSM programs through the America Competes Act”. This is in fact incorrect for the America Competes Act only authorized the creation of a Professional Science Master’s program at the National Science Foundation (NSF), and it did not provide any funding. Supporters of the PSM degree are hoping for action via the Fiscal Year (FY) ’09 appropriations, but the US omnibus bill approach (which provides for a number of miscellaneous enactments) makes establishing specific program appropriations particularly difficult.

In any case the uplift in PSM support and associated offerings, while not seamless, reflects the capacity of institutions like Sloan to push and facilitate the construction of new knowledge/spaces such that they eventually become institutionalized. As with the entry on stem cell research advances that we published on 21 November 2007 we see, yet again, how foundations can use their resources, linkages to universities, and autonomy, to strategically pursue goals that might get blocked within universities. As the Washington Post article notes:

That it took a foundation, and not a school, to get the ball rolling is not entirely surprising, educators said, despite a broad agreement that the country needs more trained scientists.

PSM supporters expected — and met — resistance from some educators, who thought the science course requirements were too limited or who did not want PSM students in their classrooms because they didn’t think the students had done the prerequisite courses.

In addition, universities are tradition-bound institutions. It can be difficult for schools, especially state-run systems, to get approval to start something new. Schools don’t like to force experts in one field to change their focus or unwillingly collaborate outside their discipline.

In the end universities, especially public universities, need to be pushed, embedded as they are in complex legal foundations and held back by large and complex bureaucracies. We’ll return to a related issue soon: the organizational barriers preventing the development of international double and joint degrees in public universities, though sadly no foundation in North America has stepped in (yet) to spur on developments on this front. And if you want an interesting contrast on this issue compare the North American situation to the European one; a context that has experienced substantial change via the European Commission’s Erasmus Mundus program. In short, the reduction to barriers to innovation in higher education, and the construction of new knowledge/spaces, is increasingly associated with an emerging constellation of socio-economic imaginaries, many of which are derived from non-university quarters. We thus need to focus more attention on the nature of these imaginaries, and the modes of engagement that lead them to become noteworthy forces of governance.