Note: GlobalHigherEd will post brief entries by guest contributors from time to time. This one is by Amy W. Newhall (newhall@u.arizona.edu) of the University of Arizona.

In late September yet another American university announced an agreement to set up educational and research programs in the Gulf. The ambitious agreement between Michigan State University and the Dubai governmental entity TECOM Investments will “mesh MSU’s academic strengths with regional needs. MSU in Dubai is planning initially to offer not-for profit bachelor’s and master’s degree programs.” The new programs will be located in Dubai International Academic City, a free trade zone which is in keeping with TECOM’s stated goal to “Establish, own and promote various ventures in affiliated free trade zones, including educational institutions and research centers; investment; telecommunication and telecommunication equipment and accessories; film festival; media and broadcasting.”

Just which programs will mesh with what regional needs have not yet been revealed but agreements in other Gulf states such as the UAE, Bahrain, Qatar and Kuwait suggest they all will be in technical fields: medicine, foreign service, business administration, computer science, and engineering.

While American technical education is widely admired, its tradition of liberal education is less highly regarded according to a recent (June 2007) report titled Studying the American Way: An Assessment of American-Style Higher Education in Arab Countries by Shafeeq Ghabra and Margreet Arnold. Link here or here for a PDF copy of the study. Elements of liberal education curricula are often deemed to be at odds with local religious, political and cultural traditions. In some countries, teaching materials have been censored or bowdlerized and teaching methods seriously circumscribed. The summary firing of an instructor who discussed the Danish cartoon controversy and showed some of the cartoons in class at Abu Dhabi’s Zayed University in March 2006 illustrates the gulf between local and American understandings of protected speech, legitimate classroom activities and academic freedom. No procedural safeguards or processes were in place to protect the teacher’s rights nor were any processes by which she could contest the allegations and actions taken against her, according to statements on the matter. Zayed is not a branch US campus; so far it is only a candidate for accreditation in the US. It is not clear whether accrediting agencies take into account the existence or the absence of standard professional policies, regulations and grievance procedures in their accreditation assessments.

MSU’s deal mirrors that of more narrowly focused single program branch campuses run in Qatar by five different American universities, Carnegie-Mellon, Georgetown, Virginia Commonwealth, Weill Medical College of Cornell and Texas A&M. [See today’s GlobalHigherEd entry on Qatar] They are operated by their home campuses with the same admissions standards and curriculum. Each home campus has “full academic authority and quality control over courses and programs.” Virginia Commonwealth University runs the School of the Arts in Qatar, one of the oldest of the branch institutions and their students receive a VCU degree . VCU maintains complete control over hiring and retention. However, all instructors require a visa to work in Qatar and that granting power remains in the hands of the state. Visas can be revoked at any time.

New York University (NYU) has been exploring the possibility of developing a mini-university in Abu Dhabi complete with programs in humanities, social sciences and natural sciences. Administrators envision a full undergraduate program and eventually some graduate ones. The new Abu Dhabi school would serve students from all over the region in addition to NYU study abroad students. Faculty from New York would supplement permanent faculty based in country. The proposal has generated considerable and sometimes contentious discussion on the NYU campus. Serious questions have been raised concerning “academic freedom, equal access and opportunities for women and Jews and human rights issues.” NYU prides itself on having one of the largest (if not the largest) study abroad program in the world. Just how this latest proposal fits in with its own educational program and overall objectives is not clear, nor is it clear how the proposed fields of study will appeal to the different sets of students.

Note: GlobalHigherEd will post brief entries by guest contributors from time to time. The first of several that will appear in the next two weeks is by May Wazzan <may.wazzan@googlemail.com>, a graduate student at the London School of Economics.

The small but very wealthy state of Qatar has recently announced an integral part of its future vision; reinventing itself as a more economically diversified, less hydrocarbon- dependent, Knowledge Economy (KE). The formulation of the parameters of this vision has been assisted by the World Bank. To this end, the past five years have brought budget constraint free, billion dollar reform plans in areas such as Education, ICT, R&D, and the Labor Market; areas where the notion of the KE has cast prominent policy implications. Against this background, Qatar Foundation, a private-government sponsored institution, has launched the massive ‘Education City’ (EC) in Doha, the capital city. EC is to play a key part in Qatar’s ‘KE vision’, and its objectives of becoming the innovative hub for higher education and Science and Technology development and research in the region. 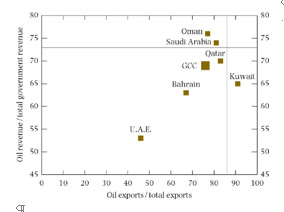 Figure 1: Qatar faces an oil-dependency ratio higher than of the average GCC ratio in terms of oil revenue to total government revenue and oil exports to total experts, making diversification an urgent matter on the country’s policy agenda

EC houses branches of several American universities (including Carnegie Mellon, Texas A&M, Cornell, Georgetown, and Virginia Commonwealth), strategically selected to teach different disciplines within the free- zone campus, work autonomously and under the same standards as their home campuses. QF offers the universities comprehensive financing, student fees go back to the home campuses but the universities are conditioned to make purchasing contracts locally. In 2006, 2,018 students were enrolled in EC. Up till today, EC has graduated 130 students. The campus is networked by an advanced IT infrastructure which is expected to benefit the entire region, given that it will connect different institutions in the Middle East. Within the campus, a new Science and Technology Park was recently launched to house local and international firms which will engage in science and technology development and research. Theoretically, the idea of EC corresponds to the Triple Helix Model (Etzkowitz & Leydesdorff, 2000), of the public, private, and academic configuration, expected to spur innovation. The universities at EC will serve as the academic infrastructure for the park’s research oriented science firms.

But will EC deliver its promises to the Qatari Economy? EC faces the need to balance the role of the universities as educators and the use of universities as an ‘export industry’. The extent of local multiplier and spillover effects depends on the commitment of the universities and the willingness and incentives of Qatari nationals to engage in knowledge acquisition. The latter still faces shy doubts. Besides, one may be concerned about the strength of the foreign universities’ cultural and social synergies with the country which may create the threat of excessive commercialization of the university, at the expense of its embededness. For example, EC is the first co-education institute in Qatar and the use of advanced English is not so common yet. The Science and Technology Park’s location within the EC is strategic, especially if complimented by a serious commitment to engage local Qatari’s in R&D, something which has never been part of the Qatari mindset before. Without a doubt, EC is a state of the art, ambitious and promising venture. However, it is extremely important to ensure that EC doesn’t end up as solely a playground for foreign establishments. Kevin Morgan (1997) referred to the danger of installing ‘cathedrals in the desert’: facilities which are seriously under-utilized by local firms. Ironically, Qatar is literally a desert land.

Etzkowitz, H., Leydesdorff, L. (2000). The dynamics of innovation: from National Systems and Mode 2 to a Triple Helix of university-industry-government relations. Research Policy, 29, 109-23.