Many of us are likely to be familiar with the film An American in Paris (1951), at least by name. Somehow the romantic encounters of an ex-GI turned struggling American painter, with an heiress  in one of Europe’s most famous cities — Paris, seems like the way things should be.

So when the US-based Lumina Foundation announced it was launching Europe’s ‘Tuning Approach within the Bologna Process’ as an educational experiment in three American States (Utah, Indiana and Minnesota) to  “…assure rigor and relevance for college degrees at various levels” (see Inside Higher Ed, April 8th, 2009),  familiar  refrains and trains of thought are suddenly shot into reverse gear. A European in America? Tuning USA, Europe style?

For Bologna watchers, Tuning is no new initiative. According to its website profile, Tuning started in 2000 as a project:

…to link the political objectives of the Bologna Process and at a later stage the Lisbon Strategy to the higher education sector. Over time Tuning has developed into a Process: an approach to (re-)design, develop, implement, evaluate and enhance quality in first, second and third cycle degree programmes.

Given that the Bologna Process entails the convergence of 46 higher education systems across Europe and beyond (those countries who are also signatories to the Process but how operate outside its borders), the question of how comparability can be assured of curricula in terms of structures, programmes and actual teaching, was clearly a pressing issue.

Funded under the European Commission’s Erasmus Thematic Network scheme, Tuning Educational Structures in Europe emerged as a project that might address this challenge.

However, rather like the Bologna Process, Tuning has had a remarkable career. Its roll-out across Europe, and take up in countries as far afield as Latin America and the Caribbean (LAC) has been nothing short of astonishing.

Similar processes are under way in Central Asia, the Mediterranean region and Africa. And while the Bologna promoters tend to emphasise the cultural and cooperation orientation of Tuning and Bologna, both are self-evidently strategies to reposition European higher education geostrategically. It is a market making  strategy as well as increasingly a model for how to restructure higher education systems to produce greater resource efficiencies, and some might add, greater equity. 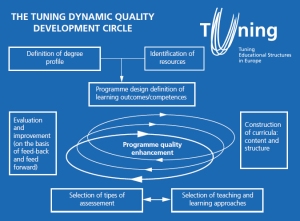 Similarly, the Tuning Process is regarded as a means for realizing one of the ‘big goals’ that  Lumina Foundation President–Jamie Merisotis–had set for the Foundation soon after taking over the helm; to increase the proportion of the US population with degrees to 60% by 2025 so as to ensure the global competitiveness of the US.

According to the Chronicle of Higher Education (May 1st, 2009), Merisotis “gained the ear of the White House”  during the transition days of the Obama administration in 2008 when he urged Obama “to make human capital a cornerstone of US economic policy”.

Merisotis was also one of the experts consulted by the US Department of Education when it sought to determine the goals for education, and the measures of progress toward those goals.

By February 2009, President Obama had announced to Congress he wanted America to attain the world’s highest proportion of graduates by 2020.  So while the ‘big goal’ had now been set, the question was how?

One of the Lumina Foundation’s response was to initiate Tuning USA.  According to the Chronicle, Lumina has been willing to draw on ideas that are generated by the education policy community in the US, and internationally.

Clifford Adelman is one of those. A  senior associate at the Institute for Higher Education Policy in Washington, Adelman was contracted by the Lumina Foundation to produce a very extensive report on Europe’s higher education restructuring. The report (The Bologna Process for U.S. Eyes: Re-learning Higher Education in the Age of Convergence) was released early this April, and was profiled by Anne Corbett in GlobalHigherEd. In the report Adelman sets out to redress what he regards as the omissions from the Spellings Commission review of higher education.  As Adelman (2009: viii)  notes:

The core features of the Bologna Process have sufficient momentum to become the dominant global higher education model within the next two decades. Former Secretary of Education, Margaret Spellings’ Commission on the Future of Higher Education paid no attention whatsoever to Bologna, and neither did the U.S. higher education community in its underwhelming response to that Commission’s report. Such purblind stances are unforgivable in a world without borders.

But since the first version of this monograph, a shorter essay entitled The Bologna Club: What U.S. Higher Education Can Learn from a Decade of European Reconstruction (Institute for Higher Education Policy, May 2008), U.S. higher education has started listening seriously to the core messages of the remarkable and difficult undertaking in which our European colleagues have engaged. Dozens of conferences have included panels, presentations, and intense discussions of Bologna approaches to accountability, access, quality assurance, credits and transfer, and, most notably, learning outcomes in the context of the disciplines. In that latter regard, in fact, three state higher education systems—Indiana, Minnesota, and Utah—have established study groups to examine the Bologna “Tuning” process to determine the forms and extent of its potential in U.S. contexts. Scarcely a year ago, such an effort would have been unthinkable.

Working with students, faculty members and education officials from Indiana, Minnesota and Utah, Lumina has now initiated Tuning USA as a year-long project:

The aim is to create a shared understanding among higher education’s stakeholders of the subject-specific knowledge and transferable skills that students in six fields must demonstrate upon completion of a degree program. Each state has elected to draft learning outcomes and map the relations between these outcomes and graduates’ employment options for at least two of the following disciplines: biology, chemistry, education, history, physics and graphic design (see report in InsideIndianabusiness).

The world has changed. The borders between the US and European higher education are now somewhat leaky, for strategic purposes, to be sure.

A European in America is now somehow thinkable!