Our era of ‘global urbanization’ — one where the majority of the world’s population now lives in ‘urban’ areas – raises some interesting opportunities and challenges for higher education systems and institutions. This issue came to mind today when Roger Keil (Professor and Director, The City Institute at York University) tweeted a link to this story (‘How Cities Grow: Dispersion, not Densification‘) by Wendell Cox.

What Cox, Keil, Koolhaas, Kotkin, McGee, Sudjic, and many other urban analysts are pointing out is that we are seeing not just the growth of the proportion of the world’s population living in cities, but also the emergence of new spatial patterns and orders; ones associated with more dispersed and therefore less dense concentrations of people than in older (denser) ‘urban’ areas.

This emerging pattern is associated with terms like extended metropolitan regions, exurbs, edge city, borderless cities, megapolitan areas, megalopolis, the ‘100 Mile City,’ and the like. There are some important differences between these terms and their origins (some of which go back many decades), but for the purposes of this blog entry we’ll leave the differences to the side. 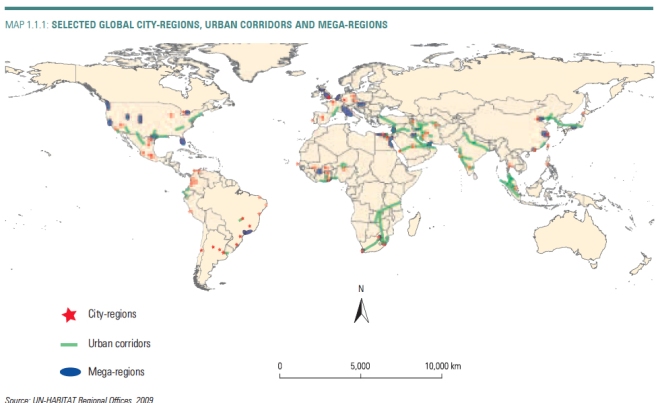 And here are a few comments, from Cox’s piece in newgeography, on the dispersal dimension of urbanization:

Understanding Urban Areas: However almost without exception, urban areas are getting less dense. ….

1960-1990 Data: Historical urban population density is not readily available. Kenworthy and Laube were pioneers in this area, publishing estimates from 1960 to 1990 for a number of urban areas. That data indicates density losses in the more than urban areas for which they were able to develop comparable data. The world average decline was 20 percent, ranging from 15 percent in the United States to 29 percent in Europe and 33 percent in Australia. While Tokyo was doubling in population, its population density was dropping 17 percent between 1960 and 1990. While Zurich was adding 21 percent to its population, it was becoming 13 percent less dense.

Recent Data: The dispersion continues, which is indicated by these high-income world cases:

Dispersion is not limited to high income urban areas, with declining densities in evidence across lower and middle income nations as well. For example:

Urban growth continues to be overwhelmingly in less dense suburban areas, rather than in the more dense urban cores, and as a result even as urban areas grow, they become less dense. This is how cities grow.

Now, we have seen the growth of tertiary enrollment at the same time that we have seen the emergence of the era of global urbanization.  The numbers evident below (in a graphic from p. 11 of UNESCO’s Global Education Digest 2009) also point to the rapid growth of enrollment numbers and levels outside of the West, albeit unevenly. I don’t have the data available about the proportion of these students enrolled in tertiary institutions located in ‘urban’ areas, but it would be safe to assume they are in the majority.

On these points, I can’t help but think that the rise of the on-line for-profit higher education providers (e.g., Laureate International Universities), or the providers with smaller offices scattered through metropoli around the world (and indeed across parts of some metropolitan regions), reflect not just their ability to identify and serve new demographic segments of society, but perhaps in ways that also reflect the emerging new geographies we see in this era of global urbanization. In other words perhaps these higher education providers are less fixed in space since fixity is not one of their core objectives. I’m not suggesting that this stance is necessarily desirable, but it is worth thinking about carefully.

It is also worth questioning if traditional providers of higher education are built for the much more stretched out spatial era emerging in almost all of our world regions. And if not, what are the options — technological, organizational, etc. — for addressing a provider-society disconnect that will surely deepen over time?