Both China (PRC) and the Hong Kong SAR offer an expanding and highly competitive market opportunity for overseas higher education institutions (HEIs). As noted in a recent report commissioned by the British Council (UK-China-Hong Kong Transnational Education Project), a number of UK HEIs are providing hundreds of new ‘international’ degree programmes in Hong Kong and China.

These are a relatively recent phenomenon – according to the British Council Report, more than 40% of joint initiatives in Hong Kong were begun after 2003. Overall, the UK is a significant provider of international education services in Hong Kong, providing 63% of ‘non-local’ courses (compared to 22% from Australia, 5% from the USA and 1% from Canada). These links were bolstered by the ‘Memorandum of Understanding on Education Cooperation’ signed on 11th May 2006 by Arthur Li (Secretary for Education and Manpower HK) and Bill Rammell (Minister of State for Higher Education and Lifelong Learning UK). The memorandum aims, amongst other things, to strengthen partnerships and strategic collaboration between the UK and Hong Kong. 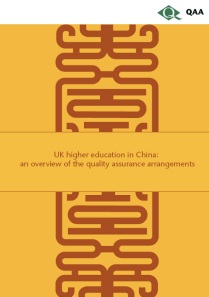 In 2006, the QAA conducted audits of 10 selected partnerships between UK and Chinese HEIs in order to establish if and how UK institutions were maintaining academic standards within these partnerships. The main findings are that:

The map profiled above was extracted from this report. A similar exercise was carried out in 2007 on partnerships between 6 UK HEIs and Hong Kong HEIs.

These practices and partnerships exemplify the international outlook of many UK HEIs, and underscore the perceived (significant) role of China in their future planning and policies. Unlike Hong Kong, China is seen as market ripe for expansion, with substantial unmet demand for higher education that will only grow into the future. China is by far the biggest ‘source’ country of international students globally, and UK institutions are increasingly recognising the possibility of taking their educational programmes to the students.