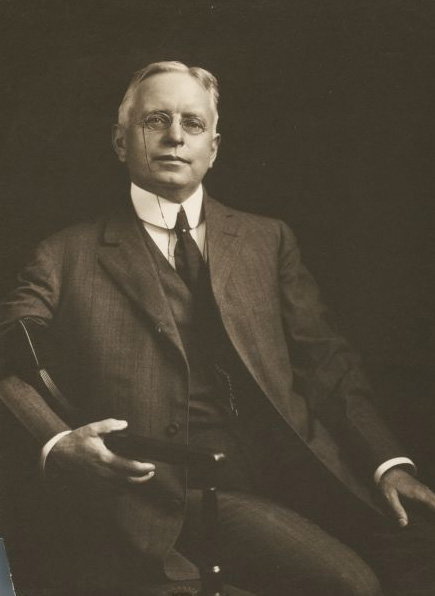 As one of us (Kris) walked towards a College of Letters and Science Curriculum Committee meeting yesterday afternoon I passed by Bascom Hall, the central administrative building of the University of Wisconsin-Madison. A memorial plaque at the main entrance to Bascom Hall states the following:

Whatever may be the limitations which trammel inquiry elsewhere, we believe that the great state University of Wisconsin should ever encourage that continual and fearless sifting and winnowing by which alone the truth can be found.

The plaque makes reference to a celebrated 1894 case regarding Richard T. Ely (pictured above in 1910), director of UW-Madison’s then School of Economics, Politics and History. Ely’s work was equated with “utopian, impractical, or pernicious doctrines”, and he was being vigorously attacked at the time. In the end his job, genuinely on the line, was saved.

The Ely case, and the principles expressed in the Board Of Regents 1894 ruling (part of which are quoted above), become one of the foundations of academic freedom in the United States; a principle and practice that, while not perfect, plays a fundamental role in the capacity of US universities to be prolific producers of knowledge, and of innovations.

The production and circulation of knowledge is not always a straightforward matter. The capacity to speak ‘truth to power’, or simply to search for the ‘truth’, on issues as basic as bridge collapses or the causes of cancer, let alone labour rights, social inequality or torture, is not guaranteed: it has to be maintained, discussed, preserved, protected, symbolized, institutionalized, memorialized, and fought for.

In this historic context, the intertwined forces of globalization and neoliberalism, and the associated restructuring of higher education and research, are generating a series of challenges for advocates of academic freedom. For example, the establishment of branch campuses and overseas programs is generating a series of fascinating deterritorializing tendencies, an issue one of us has written about in the Singaporean context*, and which remains surprisingly unexamined in the rush of changes in the Middle East (especially Qatar and UAE) right now.

It is thus noteworthy that a conference – Free Inquiry at Risk: Universities in Dangerous Times – will be held at The New School in New York City on October 29, 30, and 31, 2008. As the organizers of the conference state:

Over three days, the conference speakers will explore: how the trends and challenges that face universities in the US and abroad today may affect the core values of academic freedom and free inquiry. These current trends include rapid globalization, changes in the geo-political arena, modes of financing, the extension of higher education franchises, the rise of collateral institutes and research centers, the relationship between specialization and integration, regime change, and other conditions of duress.

With reference the historic foundations of academic freedom, at least in the US, the conference is also a “major part of the commemoration of the 75th anniversary of the University in Exile, a remarkable haven of academic freedom and free inquiry”. As The New School puts it, the University in Exile was conceived by its first president (an economist), Alvin Johnson, and it:

rescued and employed European intellectuals and artists who had been dismissed from teaching and government positions by the regimes of Hitler and Mussolini. More than 180 scholars and their families found refuge here, including Gestalt psychologist Max Wertheimer and economists Karl Brandt and Gerhard Colm. Nobel prize winner Franco Modigliani was one of its first students. In 1934, the University In Exile—renamed The Graduate Faculty of Political and Social Science—received authorization from the Board of Regents of the State of New York to offer master’s and doctoral degrees, and began publication of its international journal of the social sciences, Social Research, still one of the most influential academic journals in the United States.

These are challenging times, and it will be interesting to see how effectively this stellar line-up of speakers and panelists grapple with the topic Free Inquiry at Risk: Universities in Dangerous Times. How will they, for example, relate thinking about academic and free inquiry to the many non-university spaces, or hybrid (their term is “collateral”) spaces, associated with contemporary knowledge production? And what of the deterritorialization of academic freedom in places like Qatar Education City, Singapore’s Global Schoolhouse (where Hanna Holborn Gray’s university has a formal legal presence via the Chicago Graduate School of Business) or NYU Abu Dhabi? Will discussions engage in the grounded practices associated with important initiatives being undertaken by NYU-based Scholars at Risk (SAR) and the Institute of International Education (IIE). Finally, how will they engage with the less tangible governance forces shaping free inquiry that we have been tagging, in GlobalHigherEd, under the ‘audit culture’ umbrella.

Path dependencies are being generated right now across the globe regarding how free inquiry is being re-conceptualized, and protected or inhibited. The timing for such an event could not be better given the fast pace of changes underway, and the importance of not forgetting initiatives like the University in Exile.

* Olds, K. (2005) ‘Articulating agendas and traveling principles in the layering of new strands of academic freedom in contemporary Singapore’, in B. Czarniawska and G. Sevón (eds.) Where Translation is a Vehicle, Imitation its Motor, and Fashion Sits at the Wheel: How Ideas, Objects and Practices Travel in the Global Economy, Malmö: Liber AB, pp. 167-189.