Editor’s note: today’s entry was written by Professor Jill Trewhella (pictured to the right), Deputy Vice Chancellor – Research, University of Sydney, Australia. It was originally delivered at the Australian Financial Review Higher Education Conference, 9 March 2009. Our thanks to Nicholas Haskins, Program Manager (International Networks), Office of the Deputy Vice-Chancellor (International), for bringing this interesting text to our attention, and to Professor Trewhella for allowing us to post it here. Professor Trewhella is Professor of Molecular and Microbial Bioscience and a former Director of Bioscience at America’s top nuclear research facility, the Los Alamos National Laboratory.

The Challenges and Opportunities for Multidisciplinary Research in a World of Complex, Interdependent Systems

For 2000 years, the advancement of knowledge in western civilization has taken a path of increasing specialization.  We have approached understanding our world by deconstructing it into smaller and smaller fragments creating the disciplines and subdisciplines in order to be able to predict, or at least to explain, behaviour in nature, individuals, and society.

In today’s knowledge landscape there are powerful drivers for multidisciplinary research.  Through simple collaboration, researchers from different disciplines can accomplish more by teaming.  Interdisciplinary research moves beyond simple collaboration and teaming to integrate data, methodologies, perspectives, and concepts from multiple disciplines in order to advance fundamental understanding or to solve real world problems.  Interdisciplinary research requires either that an individual researcher gains a depth of understanding two or more than one discipline and be fluent in their languages and methodologies, or more frequently that multidisciplinary teams assemble and create a common language and framework for discovery and innovation.

The drivers for interdisciplinary research are varied.

Funding agencies also encounter difficulties in facilitating interdisciplinary research, and must find creative mechanisms for overcome barriers, such as:

Benchmarking the mechanisms by which successful interdisciplinary programs have been supported is essential to ensuring the most return for investment in this challenging area.  Looking at home and abroad at the results of using problem focused calls, seed funding, sustained funding over a longer term, targeted fellowships, etc, is essential for future planning.

Training researchers to work at the interfaces of the disciplines

Training researchers who can transcend the barriers that exist between the disciplines requires innovation in teaching and learning.   In the University setting, our training programs largely focus on in depth training in a discipline or a set of closely related sub-disciplines.  To develop the pool of researchers who are best prepared for interdisciplinary research, we need undergraduate programs that provide depth in the major discipline(s) while also enabling students to participate in interdisciplinary courses and be exposed to research experiences that transcend the discipline of their major. 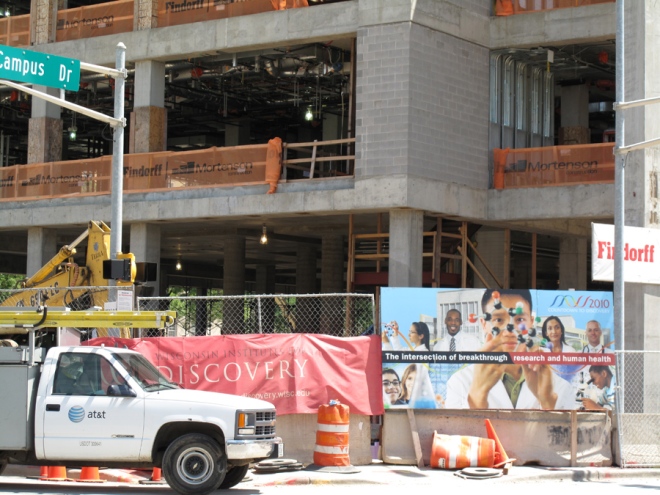 PhD programs need to consider the benefits of broader exposure.  Lowering the barriers to students moving between institutions and even disciplines could have great benefits for our ability to train the next generation of interdisciplinary researchers and researchers who are facile at participating in interdisciplinary teaming.  We need to recognize the benefits for students who gain training in one discipline to be able to acquire training in another – and enable it to happen.

There are examples of successful programs aimed at encouraging interdisciplinary training.  I once hosted in my Biophysics laboratory (which was in a Chemistry Department!) a young graduate student from the Mathematical Biology Department who was participating in the Integrated Graduate Education Research Traineeship (IGERT) program sponsored by the US National Science Foundation.  The idea was, in this case, for the student to learn the difficulties involved in acquiring accurate biophysical data.  The student had no aspirations to become an experimentalist, but he left my laboratory understanding how the data were generated and what its limitations and strengths were; and importantly what he would be asking of his collaborators to produce more data!  He could use this knowledge to formulate the questions he needed to ask of other kinds of experimental data that would be the ultimate test of his theoretical frameworks.  This example may seem a very modest one, as the distance between mathematical biology and experimental biophysics seems not so great, but as such it is a good demonstration of how difficult it can be to become truly interdisciplinary.  The languages, cultures and goals of what might be thought of as subdisciplines here, often make what is learned in one of no value to the other; the theorist’s spherical cow being the anecdotal example epitomizing the gulf of understanding between theory and experiment in the study of biological systems.

The potential for interdisciplinary research ultimately hinges on the extent to which individuals want to engage in it, and equally importantly if they have the opportunity to do so.  Academia, national laboratories, and industry can create the opportunities and incentives to attract our best and brightest to this frontier.  The individual interdisciplinary researcher is likely to be a relatively rare bird, and it will be the teams of researchers that are more the norm for advancing interdisciplinary research.  Research teams are in themselves modestly complex social entities and in their 2004 study entitled Facilitating Interdisciplinary Research, a panel of the US National Academy of Sciences found that they were limited by the lack of a body of peer reviewed research in the social sciences that “elucidated the complex social and intellectual processes that make for successful interdisciplinary research.”  While we have made some strides in thinking about the role of flexible structures and funding incentives to facilitate multidisciplinary teams coming together for a problem focussed effort or an area study, there is a need for social scientists to grapple with the more fundamental aspects of what facilitates successful interdisciplinary research; that is what enables high performance teams breaking down the barriers of language and culture and create knowledge that drives innovation.