Further to our entry on the new Rand report (U.S. Competitiveness in Science and Technology), today’s Chronicle of Higher Education includes coverage (‘Subcommittees Debate Proposal to Bring International Students to U.S.‘)of some global higher ed-related testimony on 19 June 2008 at the United States House of Representatives. This news item is, in some ways, the higher ed side of the higher ed/research dynamic that is becoming framed in global geopolitical and geoeconomic senses by elites in the United States, Europe, Australasia, and so on.

In the context of a joint session sponsored by the US House Foreign Affairs (Subcommittee on International Organizations, Human Rights, and Oversight) and the House Education and Labor Committee (Subcommittee on Higher Education, Lifelong Learning, and Competitiveness), advocates for the Restoring America’s Leadership through Scholarships for Undergraduates from Developing Countries: The Uniting Students in America (USA) Proposal testified yesterday. The witnesses, as they are deemed, were:

As the Chronicle notes, the plan for the “Uniting Students in America” proposal:

would finance 7,500 scholarships each year for undergraduates from foreign countries who come from low-income families. Rep. William Delahunt, a Democrat from Massachusetts who is the chairman of the Foreign Affairs Subcommittee on International Organizations, Human Rights, and Oversight, said he plans to introduce a bill by the end of the summer that would create the scholarship program. The program is projected to cost $1-billion over four years and would assist 30,000 students per year by the time it is fully phased in. 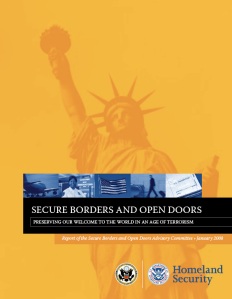 The testimonies point to a desire to more intensely weave together the dual objectives of international development and the enhancement of the reputational standing of the United States in the world via global higher ed. Indeed, the title of the hearing – Restoring America’s Leadership through Scholarships for Undergraduates from Developing Countries – is a blunt statement that in many ways says it all. Yet it is really the testimonies that provide the nuance and flesh to this agenda. On this note, here are some lengthy quotes from two of the speakers.

Much has been written about America’s role and reputation in today’s post Cold War and post 9/11 context. Much of that literature is ideological, lacking both balance in perspective and a constructive long term strategic view of America’s special place in the world. While an exhaustive discussion of this literature is beyond the scope of this hearing, this does seem an appropriate place to suggest a few ways to achieve greater balance and a greater focus on long term approaches to America’s positive engagement with the rest of the world.

Defense Secretary Robert M. Gates articulated these objectives clearly in a speech given on November 26, 2007. He said, “…based on my experience serving seven presidents, as a former director of C.I.A. and now as secretary of defense, I am here to make the case for strengthening our capacity to use ‘soft power’ and for better integrating it with ‘hard power…. ’ We are miserable at communicating to the rest of the world what we are about as a society and a culture, about freedom and democracy, about policies and goals…. We can expect that asymmetric warfare will be the mainstay of the contemporary battlefield for some time. These conflicts will be fundamentally political in nature and require the application of all elements of national power. Success will be less a matter of imposing one’s will and more a function of shaping behavior of friends, adversaries and, most importantly, the people in between.”

Secretary Gates was drawing from the work of Joseph S. Nye Jr.’s Soft Power: The Means to Success in World Politics (2004) which contends that effective public diplomacy includes “building long-term relationships that create an enabling environment for government policies.” Nye maintains we need to develop “lasting relationships with key individuals….”

Similarly, in January 2008, we were presented with the report [cover image above] of the Secure Borders and Open Doors Advisory Committee constituted jointly by the Department of Homeland Security and the Department of State. Its co-chairs’ message stated: “Our long term success requires not only that we deter and detect determined adversaries, but also that we persuade millions of people around the globe of our ideals – democratic freedom, private enterprise, human rights, intellectual pursuit, technological achievement.”

One of the key recommendations of the Secure Borders and Open Doors report was that “the U.S. should articulate a comprehensive policy for attracting international students….”

In my view, we are approaching an opportune time for some reformulation of our foreign policy. While we must continue to take all necessary measures to ensure our security, we should also become more pro-active in promoting our nation’s values and opportunities to others so that they can truly understand and benefit from our way of life. In this context, we can leverage one of our country’s most unique strengths, its institutions of higher learning. While worldwide opinion polls would suggest that America has lost its allure, there is no question that America’s colleges and universities remain the envy of the world and that an opportunity to gain a degree in the U.S. is without compare. 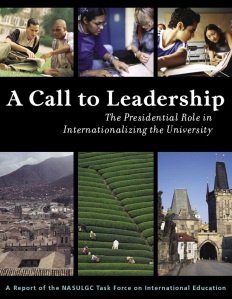 And second, from William B. DeLauder (President Emeritus, Delaware State College, Counselor to the President, National Association of State Universities and Land-Grant Colleges):

I believe that there is a broad consensus around the country that student mobility contributes greatly to fostering goodwill and better understandings between nations. Some have called this a form of educational diplomacy. To be effective it must occur both ways – i.e., more American students studying abroad and more international students studying in this country.

As stated in the Report of the NASULGC Task Force on International Education [cover image above], “The goodwill and strong personal ties to this nation built through generations of students coming to our colleges and universities from around the world are important underpinnings of U.S. foreign relations.” Former Secretary of State Colin Powell expressed it this way: “International students and scholars enrich our communities with their academic abilities and cultural diversity and they return home with an increased understanding and often a lasting affection for the United States. I can think of no more valuable asset to our country than the friendship of future world leaders who have been educated here.”….

The USA Program therefore should contribute to improving the image of the United States abroad and thereby improve our diplomacy abroad. As several studies have shown, our image around the world is badly tarnished. International students who study in one of our colleges or universities will have an opportunity to meet and talk with American students and others from diverse backgrounds, to experience the diverse American culture, to learn about American democracy, to learn about American institutions, and to obtain a valuable undergraduate education that will be a strong asset in their life pursuits. Many of these students are expected to become future leaders within their respective countries. They will bring with this new responsibility a better understanding of the United States that should enhance their countries’ relationships with the United States.

In some ways this is nothing new: countries around the world have always sought to use scholarships to enhance their strategic communicative capacity, build their economies (through the import of skilled labour), build capacity in other countries, and so on. Yet these are interesting time in the US as the end of the Bush/Cheney era approaches.

Given the rhetoric in these testimonies it might seem like the US should be poised to launch, under the leadership of McCain or Obama, a much more substantial material and symbolic drive to support a vast number of global higher ed linkage schemes, including via the offer of scholarships to students from developing countries. However, the counter-current forces and hurdles are substantial despite the swell we are seeing now re. strategic communications agendas. These include increasing social anxiety in the US about access to a very expensive higher education system, a startling fiscal mess enabled by the Bush/Cheney regime, an ideological disconnect with the idea of state-led action via ‘soft power’ (US neoconservatives being more inclined to use state largesse for the tools associated with ‘hard power’), an existing sense of global higher ed dominance in some political circles (i.e. why spend more when we’re No. 1 already), and the lack of a national approach to higher education, let along global higher ed, as Lloyd Armstrong has noted in Changing Higher Ed.

This is an ongoing debate worth watching as the US prepares itself for a significant national political transition.