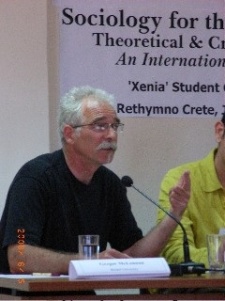 Editors’ note: several weeks ago, Professor Nigel Thrift, Vice Chancellor of the University of Warwick, UK, contributed an entry where he posed: ‘A question (about universities, global challenges, and an organizational, ethical dilemma)’. Peter N. Stearns, Provost of George Mason University, offered the first response to Nigel’s challenge in a series we will be posting through to the end of 2010.

This  ‘response’ is from Gregor McLennan, Professor of Sociology and Director of the Institute of Advanced Studies, University of Bristol. As Director of the IAS, Gregor has been busy promoting  a series of debates around the changing nature of the university in contemporary societies. His contribution to this series is therefore particularly welcome. Gregor’s work lies in the area of sociological theories and social philosophies, and has written widely on Marxism and pluralism in particular. His book, Sociological Cultural Studies: Reflexivity and Positivity in the Human Sciences, tackled some key questions of the day around (inter) disciplinarity, explanation, critical realism, complexity theory and Eurocentrism.

I want to raise a couple of issues about Nigel Thrift’s questions, to do with the way he constructs universities as a collective agency, a coherent ‘we’ that bears a ‘global’ identity. Nigel urges this ‘we’ fully to bring its actions into alignment with its ‘beliefs’, and to improve upon the shoddy performance of ‘other actors’ in tackling the ‘grand challenges’ of the day. And in that regard, the collectivity should see itself henceforth as positioned on a ‘war footing’, deploying its ‘engines of reason’ to force the principles of ‘scientific cooperation’ into service of the ‘survival of the species’.

There are several things that might be contested in this scenario of ‘agentification’, by which I mean the portrayal of universities as though they constituted a singular moral centre or personality, strategically intervening as such.

One is to do with its assumed site, the ‘global’ apparently designating something definite, and something quite obviously good. As Nigel knows, substantial objections can be raised against such easy affirmation of the nature and ‘imperativity’ of the global per se.  Yet universities everywhere now are falling over in the rush to assure themselves that meeting the ‘challenge of the global’ is something wholly other than the imperativity of the market, something that instead touches upon our deepest ethical and intellectual mission. It behoves us, I think, to be a tad sceptical about such ‘globalloney’ (in Bruno Latour’s phrase), and perhaps even to risk the accusation of parochialism by emphasising the continuing importance of the national contexts that not only universities, but many millions with an interest in the future of universities, still mainly orientate themselves around. National contexts – arguably at least – retain a certain logistical, cultural and psychological coherence that globality might forever lack; and the prospect of a world of relatively small-scale, highly educated democracies looks better geared to effective species-survival than the sort of flaccid but pushy cosmopolitanism that is currently doing the rounds.

Second, it is not self-evident that the kind of cooperation that characterizes scientific practice and development has any direct application to, or analogue within, the political processes through which any humanity-wide survival strategy will necessarily have to be coordinated. Nigel asks universities as a whole to interact in the way that individual investigators do, but this expectation is surely inappropriate. Academics are driven to work together because of their motivation to produce facts, measures, truths, and theories, whereas universities, as such, have no such intrinsic motivation, and nor do governments.

So asking universities to tackle the survival of the species is rather like asking families, or football clubs to do this. It’s not that people within these civic associations shouldn’t be mightily concerned about such imperatives, and contribute their expertise in a politically active way. It’s just that this is not these institutions’ defining concern. Indeed, in some ways the specific concern of universities – to develop plural communities of knowledge and understanding through discovery, controversial systematization, and rigorous reflection – is likely to generate some resistance to any politicized summary of the ‘threats and opportunities’ that ‘we’ all face. Don’t get me wrong, this is not a defence of the apolitical: as individuals and members of a range of collectives, we should get active around the priorities that Nigel Thrift designates. But it might be OK that universities are not best suited to organize in that targeted way. As Peter Stearns emphasises, universities’ hallmark medium is education, which is necessarily open-ended, changing and reflective. Of course, just as we need universities to free us from the blockages of our societal formations, interests and mind-sets, so in turn we need politics to reign in our deliberations and give positive shape to our values. But though they complement each other in this way, the functions of education and politics remain very different.

The third problematic aspect of Nigel’s line of thought comes out most clearly in Indira V. Samarasekera’s paper in Nature, in which it is suggested that universities have two prevailing thought-styles and labour processes: ‘solution-driven’ and ‘blue skies’. Both modes, she accepts, have to be part of core business. But whilst the latter, ‘until recently’, has been considered the ‘mainstay’, and must ‘remain so’, a much closer alignment between the two modes is held to be necessary if ‘we’ are to be more effective in ‘solving the world’s problems’. Accordingly, it is quite a good thing that the ‘fairly traditionalist’ structure of ‘curiosity-driven projects’ is giving way to a ‘fast and effective’ modality, enabling us to ‘keep pace’ with the big challenges, for which we need to ‘copy the organizations that work best’. To that end, Samarasekera maintains, we need to develop ‘collaboratories’ involving universities, government and industry, to bridge the gap between ‘universities and the private sector’, and to construct funding regimes that stimulate ‘interdisciplinary, inter-professional, and inter-sectoral approaches’.

It strikes me that the founding contrast here between ‘blue skies’ thinking (with just a hint of the smear of ‘uselessness’) and various other research practices (themselves over-schematized as ‘solution-driven’) is considerably exaggerated. But another, perhaps more insidious, bifurcation comes into play, according to which the agentic ‘we’ of the university turns out to have two bodies, as in, ‘We, the academic leaders and universities, should embrace this new relationship…’ In this depiction, the purely academic side of the collective, and the blue skies folks in particular, are ushered into the background and cast as worryingly slow off the mark, not quite up to the demands of fast and smart global Higher-ed with its solution-seeking culture. Responsibility for meeting the latter therefore falls perforce to the academic leaders, now stepping decisively into the foreground as the distinctive group that represents the essence and future of the university. So, given that the merits and deficits of, let’s say, inter-disciplinarity are never going to be definitively resolved if left to the bottom-up logic of seminar-room agonism, university leaders will have to push it through from the top, along with all the other excellent and necessary ‘inters’ of the new knowledge-society regime – inter-sectoralism, inter-professionalism, dynamic and agile Engagement with dynamic private and civic Collaborators, and so on. Now, whilst Nigel’s notion of the ‘forcing’ of knowledge seems potentially more subtle and interesting than this increasingly hectoring management ideology, a somewhat ‘traditionalist’ note still needs to be struck by way of caution, because to see universities as agentic interventionists at all is to risk missing the central point and purpose, even today, of their existence.