The globalization of higher education is associated with a wide variety of trends and impacts, though these obviously vary across space, system, and type of institution.

One of these trends is institutional and program mobility; an emerging phenomenon we have paid significant attention to in GlobalHigherEd, including via these recent entries:

Two fascinating articles have emerged this past week that dig into this broad topic with a focus on some of the organizational challenges of institutional and program mobility.

The first article (no subscription required to access) is in New York Magazine (21 April 2008), and it examines relatively intense debates about NYU Abu Dhabi, an initiative that we profiled in October (the entry was partly inspired by INSEAD‘s strategic thinking about globalization of higher education models for higher ed institutions). The New York Magazine article includes a variety of critiques of the NYU Abu Dhabi initiative, mainly from within NYU itself. The critiques focus on:

Many professors fear that, as sociology professor Craig Calhoun puts it, NYU is “creating a second-tier version of itself,” spreading itself too thin and turning the university into an academic chain restaurant—“a conglomerate with a number of wholly owned subsidiaries.”

(2) The forging of a relationship with an authoritarian political regime; an issue intertwined with concern about academic freedom, and possible problems given the sexual and religious identities of NYU faculty, students, and eventual visitors (e.g., conference attendees from Israel).

(3) The treatment of foreign labour in Abu Dhabi; labour inevitably to be used to construct the NYU Abu Dhabi campus, as they were for the iconic Palm Jumeirah in Dubai.

(4) President Sexton’s leadership style vis a vis the decision-making process, and the subsequent planning process, which is captured in this quote:

To many faculty, the Abu Dhabi project embodies the worst of John Sexton’s indulgences and the short-sightedness of his glory-seeking ambitions. Mary Nolan, a history professor who has been teaching at the university for almost 30 years, describes the Abu Dhabi project as “a quintessentially Sexton operation. He thinks he has some sort of a missionary calling, but he operates in a very autocratic manner. Deans are kept on a very short leash, and faculty governance has been absolutely gutted.”

In some ways these are criticisms that are to be expected given the ambitious nature of the initiative, and they remind us of the debates underway in the University of Warwick (UK) about a possible campus in Singapore (before Warwick pulled the plug in 2005). However, the article is noteworthy in that the critiques regarding NYU Abu Dhabi are emerging part way through the planning and implementation process such that some faculty clearly feel there is an opportunity to ‘stymie’ the initiative.

The New York Magazine article is also fascinating for it conveys, in a subtle way, the intermingling of the two geographies of NYU Abu Dhabi:

Thus the NYU Abu Dhabi initiative is, regardless of its strengths and weaknesses, an outcome of the articulation of two forceful and strategic developmental agendas that will inevitably complement and contradict for these disparate geographies are starting to be brought together. This said, while NYU is led by a powerful president (Sexton), he has much less capacity to direct, to guide, to lead, to govern, than do Abu Dhabi’s political leaders. Moreover, unlike globally active service firms (e.g., law firms, accountancy firms), faculty for higher education providers, least of all tenured faculty, cannot be forced to work at an overseas campus. Relatively flat hierarchies in Western universities mean that organizational behaviour is vastly different than in globally active private sector service firms. So while Sexton’s critics are using the firm/franchise analogy to voice their concerns about the transformation of NYU’s institutional culture, and possible damage to the institution’s reputation (brand name), Sexton is in a seriously constrained position, vis a vis the implementation process. Bringing a foreign/overseas/branch campus to life is a challenge few university presidents have experience with, partly due to organizational and other resource limitations.

If NYU Abu Dhabi is clearly an experiment in formation, as we think it is, we certainly hope that both boosters and critics, at least in New York (where a greater density of insightful analysts are based), are documenting this experiment so that others can learn from the development experience.

Meanwhile, over in the Chronicle of Higher Education, a joint venture between Liaoning Normal University in China, and Missouri State University in the United States, known as the LNU-MSU College of International Business, is the recipient of some forthcoming (2 May 2008 ) and very illuminating coverage from Paul Mooney (the Chronicle’s China correspondent) with input from Beth McMurtrie. The article (subscription required to access) outlines a series of problems, including unresponsive faculty, unqualified contract faculty (2/35 with a PhD), faculty turnover (nearing 50% last year), inadequate equipment for science courses, flagrant student cheating, English and Mandarin language skill inadequacies, inadequate distance communications systems, and on and on it goes…

Where is the quality assurance dynamic and effect, you may ask? Even this is inadequate, as this lengthy segment from the Chronicle article outlines:

All overseas degree programs run by American universities must be vetted by their accreditors, in this case the Higher Learning Commission of the North Central Association of Colleges and Schools.

She expresses surprise at the complaints that students and faculty members made to The Chronicle. For example, she says, it was her impression that a large number of faculty members from Missouri had been to the Dalian campus to work with students.

“The university is making a pretty big commitment in time and people, which is better than other programs,” she says.

Ms. Solomon acknowledges that the commission has not yet sent anyone to visit the campus, and that she relies on reports of its progress from Missouri State administrators. But, she adds, AACSB International: the Association to Advance Collegiate Schools of Business has reviewed the program in Dalian, and “we take that into consideration.”

However, Jerry E. Trapnell, executive vice president and chief accreditation officer for AACSB International, the primary accreditor of American business schools, says his organization has never visited or even reviewed the program.

The accrediting group’s last visit to Missouri State was during the 2002-3 academic year, he says, at a time when AACSB International was reviewing programs on a 10-year cycle. The bachelor’s-degree program in China had just started and did not yet have any students, says Mr. Trapnell, and his association does not review associate-degree programs.

AACSB International plans to review the LNU-MSU program during Missouri’s next scheduled review. Mr. Trapnell says the association is switching to a five-year review cycle, so he’s not yet sure when Missouri State’s turn will come up.

Although he cannot speak specifically about the China program, Mr. Trapnell says his association expects that half of a degree program’s faculty members should have “significant experience,” which he defines as holding a doctorate and having extensive work experience in the field.

“That would be a concern,” he says when told of the lower qualifications of the instructors in Dalian, “because one of the things we worry about is that the school is expected to deploy qualified faculty.” 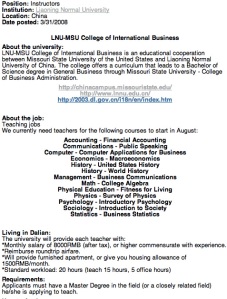 MSU administrators are likely to be busy this week answering questions about their failure to deliver, if the indicators in the Chronicle article are even half true. It is also worth noting that LNU-MSU is attempting to hire right now, as this 31 March 2008 advertisement in the Chronicle conveys. In case you are wondering, 8000 RMB is US $1,144.57 per month. Given the comments above from Jerry E. Trapnell, executive vice president and chief accreditation officer for AACSB International, this advertisement is clearly pitched at the wrong audience (MA degree holders alone). Yet given the salary and working conditions, could they actually attract quality PhD holders?

While it is highly unlikely that NYU would ever go down the MSU path, both articles shed light on the globalization of higher education development process, highlighting how much of a challenge it is for universities to move beyond MoUs and Agreements to establish and then effectively govern new forms of global networks. One dimension of this challenge is that many universities are having a difficult time facilitating intra-institutional ‘buy-in’ (aka a sense of ownership and commitment) from the people who bring universities to life, for good and for bad – their core faculty. Yet if core faculty don’t buy-in, grand visions, or even modest visions (like those hatched by MSU administrators), are much more likely to have problems, and perhaps fail to deliver. This is, of course, one of the reasons institutions like the OECD and UNESCO are becoming involved in the governance of transnational higher education (e.g., see the guidelines on ‘Quality provision in cross border higher education’). Yet these are early days on this front, as the LMU-MSU case clearly demonstrates.