The Association of Universities and Colleges of Canada just released a detailed report titled Momentum: The 2008 report on university research and knowledge mobilization.

I will paste in the full press release below, and one of us is likely to return to select aspects of the report over the next few weeks. It is abundantly clear that Canada is framing university-related R&D at a global scale, albeit with an eye on select countries and regions. Pages 91-102 are particularly focused on international collaboration with respect to patterns, mechanisms, challenges, and opportunities. Concern with international competition is suffused throughout the report.

The additional point that stands out is the relative significance of universities as drivers of R&D as compared to the private sector, the federal and provincial levels of government, and the non-profit sector. See these two graphics from the report: 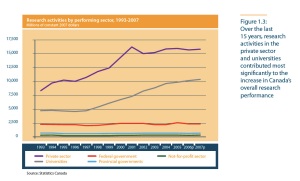 A cursory review of the report, and any knowledge of Canada, will also lead to the question of the geographical concentration of said R&D within this large and diverse country. No prizes for correct answers to the question of what is happening where, though the why and what to do about it of structural change in Canada’s geographies of R&D clearly needs some more attention.

Here is the press release:

Ottawa, October 21, 2008 — The Association of Universities and Colleges of Canada has launched a report on the state of Canadian research and development (R&D), with a particular emphasis on university research, at an event that included partners from government, the private sector and the not-for-profit sector.

The report, entitled Momentum: The 2008 report on university research and knowledge mobilization, shows universities are major players in R&D in Canada, performing more than one-third of the country’s research and contributing at least $60 billion to the economy in 2007. However, analysts agree that the world competition for talent, knowledge and innovation is fierce and Canada cannot be complacent with its accomplishments.

“The rest of the world is not standing still and the global race for research talent is becoming more and more intense,” says AUCC chair Tom Traves, president of Dalhousie University. “We expect this report to stimulate public debate on the required level and mix of support for university research in Canada.”

“This is a time when we cannot afford to cut back on public investment, but should instead see the potential for stimulating economic growth at the local and the national level by investing in people and knowledge. Having a highly skilled labour force is undeniably a major asset for any country,” notes AUCC president and CEO Claire Morris. “In these uncertain economic times, Canada must continue to improve its innovative capacity to ensure long-term prosperity,” she adds.

Momentum 2008 focuses on the importance of partnerships in university research and looks at the variety of forms collaboration takes – from university partnerships with private companies to research projects with governments, communities, the not-for-profit sector and international partners. It provides a comprehensive account of Canadian R&D, particularly the activities of the university sector and the resulting progress achieved. It also presents detailed research and analysis of national and international trends that will drive changes in university research and the Canadian R&D landscape in the future.

Momentum 2008 documents the wide range of benefits to Canadians such as new products, services, processes, policies and new ways of understanding society.

This is the second edition of Momentum produced by AUCC. The first was produced in 2005 as a way of providing information to decision makers and policy-makers about the benefits from investments made in university research.

The Momentum report is available online. Download the report.