Over the last year I’ve been stuck by how most debates about MOOCs, and MOOC platform providers, are remarkably national in orientation. In the US, for example, a surprising number of politicians and select ‘disruptive innovation’ consultants have framed MOOCs as a vehicle to help redress the fiscal challenges facing public higher education. This (the MOOC as fiscal challenge solution) is a mug’s game, though, as anyone involved in developing and running online courses (as I am for both regular credit classes and a MOOC) will tell you for they are resource intensive to both develop and run well. MOOCs are great for some things, and worse for others, but they are not going to save universities money by functioning as a silver bullet for the legacy impacts of austerity.

While the politics of MOOCs are primarily national in orientation, the developmental agendas of MOOC platforms like EdX, Coursera, FutureLearn, iversity, et al, are scaled beyond the nation, such that they incorporate multiple world regions with respect to partners and students. Select regions (East Asia, South Asia, Europe, Africa, Latin America), and select countries like China and India, are clearly being targeted by US- and Europe-based MOOC organizations and course developers, and they will be so more and more. This partially explains why international organizations like the World Bank have backed Coursera, why Coursera is working with translation services firms, and why Boston-based EdX is working with an increasing number of non-US governments. See, for example, these EdX press releases:

And see these Coursera press releases:

In order to make more sense of the emerging global footprints of MOOC platforms, I recently facilitated a mapping exercise with anonymized and aggregate (i.e. non-course specific) data regarding the location of students taking courses via Coursera. Fortunately, we have a wonderful Cartography Lab in the Department of Geography at UW-Madison. Coursera kindly provided the data in October and our cartographers went to work. What follows are two visualizations – one of the location of the 3+ million students (out of 5+ million) Coursera could geolocate, and one of Coursera’s expanding partnership base. 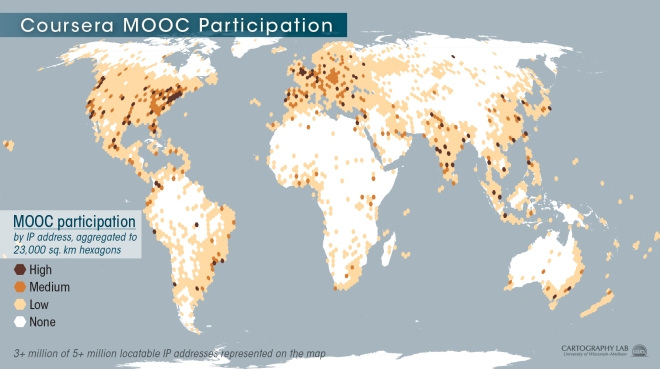 My thanks to Tanya Buckingham who worked on the above visualizations with GIS Certificate student Laura Poplett. I asked Tanya to provide some information about the first map posted above and this is what she had to say:

There are a two things about the data represented on the map that every reader should know. First, the participant data are represented using IP (Internet Protocol) address. A map of IP addresses will closely correspond to population density. Data are normalized to avoid creating a map of social phenomenon that simply reflects population density. In the experimental stages of this map, MOOC participants (as reported by IP address) were normalized with a denominator of global population information based on the LandScan dataset, from the Oak Ridge National Laboratory. In the calculations, this resulted in areas that had a higher MOOC population than total population within a given area. This could be due to a handful of reasons, including how IP addresses are counted and aggregated for a certain area, or where people are living versus where they are participating in the MOOC in which they are enrolled. Considering the data by sub-country administrative units also resulted in a less than helpful map, since the area of these administrative units vary so widely. Ultimately, a hexagon tessellation was calculated to cover the earth’s surface, without considering total population within those units. Restricting the area provided a normalization of sorts–think of it as population by square kilometer rather than a population by state or province, where it is expected that the largest areas would have the highest numbers. While the map does look similar to a population distribution in Europe and the United States it does diverge in other areas of the world.

The second thing readers should be aware of is the number of participants shown on the map are just over 3.5 million people, when there are over 5.5 million people are registered as Coursera students. If the data are a representative sample, we would expect to see similar patterns as shown on the map now. However, if there is bias for a region in the world where it is not possible to geographically locate IP addresses, mapping those additional 1.5 million students could illuminate new patterns or clusters of students in areas where they are not represented on the map now. It is because of the missing data that the legend shows a qualitative value of “high, medium, low, no” participation, rather than exact numbers of participants.

The visualizations above thus represent the approximate global footprint of one MOOC platform generated by the students who sought to take courses offered by an expanding list of partners. Regardless of whether you like the idea of MOOCs or not, MOOCs are arguably post-national higher education platforms. Their names are almost uniformly placeless. As I have noted before, the founders of US-based MOOC platforms like EdX, Coursera and Udacity [undergoing pivot] are immigrants to the US from around the world, and many of the staff working in their offices are also recent immigrants. The platforms/courses also serve a growing number of students around the world. On the basis of the first map, Coursera could, arguably, be viewed as a defacto European and Indian MOOC platform for it has a major presence in both of these territories. The sames goes for EdX. Indeed I argued this point in Brussels at a recent ACA/EUA workshop, though the iversity.org representative at the workshop countered that they were the “European” MOOC platform for they were born in Europe and operated by European rules with respect to the protection of student data. Indeed he went on to flag how they would be more protected from the prying eye of the NSA (a worthwhile objective, though technologically to be determined!).

In any case my point is this: US-based platforms like Coursera and EdX are serving more and more students around the world, and they will continue to do so as long as the platforms exist and partners provide courses. Mediating factors obviously include language, the nature of the courses, access to the internet (the latter of which is captured well by the World Bank and the OECD in the figures below), and access to YouTube (which is used in most courses). 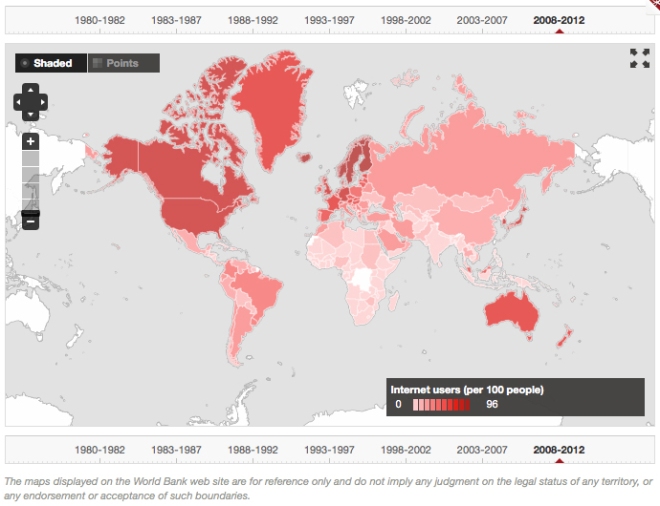 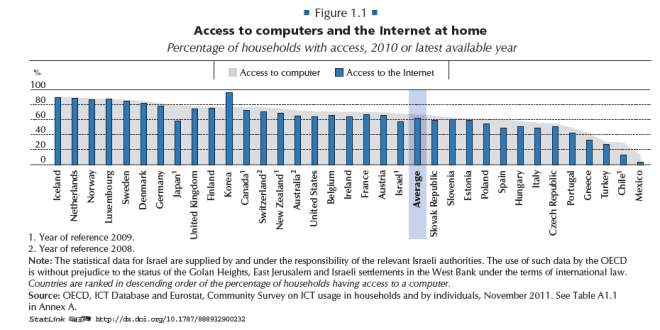 Thus, while there is an evident national and regional (in Europe) politics to MOOCs phenomenon, it is important to recognize that these courses reach students around the world, including in countries far less well resourced than the origin country of most MOOCs. And given this, we may need to remember this point more often and open up/reframe practices, discussions, debates, regulations, intra-university governance pathways, analyses, and so on, to recognize this empirical fact. We’ve seen some magazine articles and blog entries on this issue (most recently Anya Kamenetz on ‘The MOOC Evolution‘), but the transnational dimension of MOOC provision and consumption has received remarkably little sustained attention considering how important it is.

My thanks to Coursera for providing the data, and to Tanya Buckingham and Laura Poplett for working so hard to creatively and effectively map Coursera’s global footprint (as at October 2013).