This is the first entry in a new weekly update series profiling interesting and periodically quirky reports, talks, or articles related to the globalization of higher education and research. These entries will typically be posted on Fridays on this WordPress.com site which is always mirrored on Inside Higher Ed. Today’s entry can be located at: http://www.insidehighered.com//blogs/globalhighered/briefly-noted-globalhighered.

This series is being developed to bridge my daily use of Twitter @GlobalHigherEd to track and share resources with more traditional blog entries that will be emerging weekly. Briefly Noted, clearly inspired by the New Yorker’s Briefly Noted series on books, is designed to provide some filtered and hopefully useful leads on what to read for those of you who have no interest in coping with the torrent of periodically useful information flowing through the Twitterverse. As the author William Gibson (in his Twitter service Great Dismal) puts it “Twitter is like little animated hieroglyphics in the margins of a working manuscript, offering obscurely breaking news.” More recently, Gibson stated that he uses Twitter as a platform for “novelty aggregation.” The GlobalHigherEd version of Briefly Noted is being designed to provide selective material pulled out of my weekly aggregation process.

ON THE OCCASION OF HIS INSTALLATION AS THE 16TH PRESIDENT OF THE UNIVERSITY OF TORONTO, by Meric Gertler (7 November 2013). Meric Gertler, one of the world’s leading economic geographers, was formally installed yesterday at the University of Toronto. His address highlights the role of the university as a “critical piece of social infrastructure” not just in the Greater Toronto region, but also at a national and global scale. While an installation address is by necessity a brief one, Gertler outlines the need to address some serious challenges via pushing down (by recognizing and better leveraging “our location” in the Greater Toronto region), pushing out (by strengthening our international partnerships,” especially in other world cities like New York, São Paulo, and Shanghai), and by pushing inwards (by “reinventing undergraduate education”). I’ve flagged his address as these three strategies reflect an attempt to both support and take advantage of Toronto’s now hyper-cosmopolitan context and associated multi-scalar networks. Gertler’s role in guiding the transformation of the University of Toronto will be worth watching for he is already voicing the need to link the university’s internationalization strategy to mission, context, and all other development strategies (versus functioning as an add-on, appendage style, or as PR rhetoric with respect to internationalization). Some interesting times ahead over the next five years in Toronto, I suspect.

THE EDUCATION APOCALYPSE, by Audrey Watters (7 November 2013).  Audrey Watters, an education writer and one of the more acerbic critics of the MOOC juggernaut, posted a very informative critique on the coming “education apocalypse:”

I want to talk to you today about narratives of the education apocalypse, about eschatology and mythology and MOOCs and millennialism, and I do so not just as a keen observer of education technology but as someone trained as a folklorist. As much as being an ed-tech writer compels me to pay attention to the latest products and policies and venture capital investment, I am fascinated by the stories we tell about all of this. I am fascinated by what I see as some of the dominant end-times myths of the business world, of the tech industry. I am fascinated by how these myths — these sacred stories —  are deployed to talk about the end of the world —or at least  “the end of the university as we know it,” as Techcrunch puts it with the fervor of a true believer.

Watters focuses on the tropes and narrative tricks that analyst-entrepreneurs like Clayton Christensen (Harvard) and Sebastian Thrun (Udacity) use to make a case that their narratives are relevant, worth paying attention to, and equally important worth paying for. Her wittily crafted argument reminded me, somewhat, of Nigel Thrift’s writings on the “cultural circuit of capital” in his book Knowing Capitalism in that both of them seek to understand how and why invented development concepts become “unassailably true,” or practices such as “blended learning” get taken up and get incorporated into new political-economic agenda (like austerity). As Watters aptly puts it:

The structure to this sort of narrative is certainly a well-known and oft-told one in folklore — in tales of both a religious and secular sort. Doom. Suffering. Armageddon. Then paradise.

But who’s paradise is it?

OCEAN SCIENCE IN CANADA: MEETING THE CHALLENGE, SEIZING THE OPPORTUNITY, by the Expert Panel on Canadian Ocean Science (Council of Canadian Academies, November 2013). While the title of this report conveys a very Canada-focused study, the 200-page text does a wonderful job of positioning Canada in global context with respect to other spaces of knowledge production about ocean sciences. The charge framing the report was:

What are Canada’s needs and capacities with regard to the major research questions in ocean science that would enable it to address Canadian ocean issues and issues relating to Canada’s coasts and enhance its leading role as an international partner in ocean science?

This charge was addressed via an analysis of Canada’s “capacity in ocean science” via an assessment of: human capacity; organizations, networks, and collaboration; physical and information infrastructure; funding; policy and governance.

From a global higher ed perspective, Chapter 3 (Canada’s Output and Impact in Ocean Science) is fascinating. This chapter’s key findings

are bolstered by a variety of very well designed visualizations that identify the spaces and networks of Ocean Science knowledge production. Four of these images are pasted in below. Who knew that inland Alberta and Switzerland were key sites of knowledge production related to the world’s oceans!

This report reminded me of some other recent reports and documents:

that are also are attempting to understand, and visually represent, the uneven spaces of knowledge production and circulation. In many of these reports the associated visualizations play an integral role in conveying key analytic messages. Thus, even if you are not interested in the ocean sciences, Ocean Science in Canada is still worth a read and could provide a model of sorts for assessments of other forms of research output and impact. 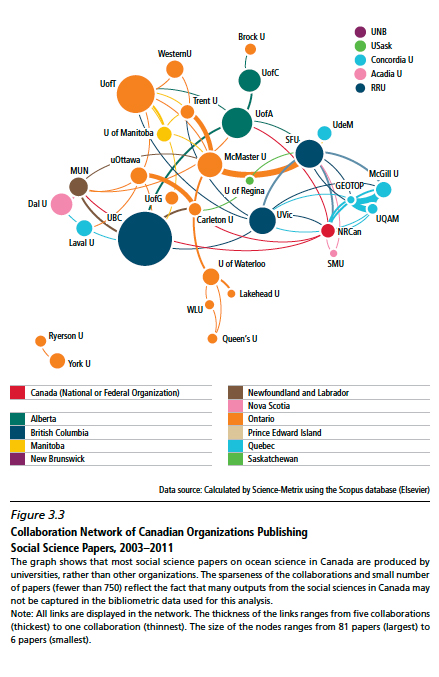