Alex Usher posted a pithy entry this morning titled ‘The Latest Bandwagon – American Students‘ that is worth a read.  In fact, it is a short one so I’m going to reprint the whole thing below, and then reflect back on his discussion of the emerging view that Canadian universities could/should recruit more American undergraduate students. I’m basing my comments below via reflections of my Gr. 12 son’s experience this year applying to five Canadian and five US universities, as well as a discussion I coincidentally coordinated with approximately 140 UW-Madison students a few days ago in my summer version of Geog 340 (World Regions in Global Context). This discussion involved engendering comparative thinking about regional similarities and differences and centered on a hypothetical study abroad year split in half between l’Auberge Espagnole (in Barcelona) and l’Auberge Canadian (in the Canadian city of their choice). The exercise ended in a hypothetical forced decision about having to choose between a future life in Spain or Canada should they be forced out of the country of their citizenship.  The objective of this discussion was to get them to begin reflecting on how student mobility and placement in new contexts contributes to the transformation of personal identities and subjectivities.

Now I don’t want to embarrass my teenage son, so I’ll leave out the details of which specific universities he applied to, but let’s just say they were relatively strong universities and liberal arts colleges, some in the big cities and some in small-to-medium sized cities.  My son is a Canadian citizen and US Permanent Resident so is treated as Canadian when it comes to tuition in Canada (which puts them, I would estimate, 25-50% below the average tuition for a US public university). And my ~ 140 UW-Madison students are predominantly juniors and seniors from the Midwest, the US coasts, and then Malaysia, South Korea, and China.

So what does Alex Usher have to say:

Over the past couple of weeks, there has been a lot of talk about US students coming to Canada.  NBC ran a segment on Americans at McGill, and the Globe and Mail ran a piece on the same.  This seems to have led many institutions to start thinking “hot damn, another market! How can we grab us some of these Americans?”

But for most institutions, this would be the wrong reaction.  Before venturing into a market, every school needs to ask itself two questions.  Why would Americans want to go to your school?  And why does your school want Americans?

Before a school starts recruiting in the US (any new market, really), some self-reflection is in order.  What, exactly, does my school offer an American that they can’t get at home?  “Cheap” isn’t good enough; Mexican universities are cheap but you don’t see American undergraduates flocking there (they weren’t flocking over our border when the dollar was at 62 cents, either).  There has to be a value proposition.

In fact, there are maybe a dozen schools in Canada that offer a mix of price and quality that make them attractive to parts of the US student population.  Students wishing to go to out-of-state flagship schools – say, Illinois or Virginia – can get similar product at a lower price in a better venue by going to McGill, Toronto or UBC (Queen’s would have a shot here, too; at a stretch, so would Alberta).  Students with their hearts set on a liberal arts education but who can’t get into any of the Tier I Liberal Arts Colleges in the US would consider St. FX, Acadia, Mount Allison or Bishop’s.  Windsor has a shot due to proximity.  For everybody else, it’s going to be a much harder sell.

Which brings us to that second question about “why Americans”: to the extent that international students are revenue sources, it’s important that they be cheap to recruit, so as to maximize net revenue.  If you’re not one of the above-mentioned institutions with a clear-cut value proposition, chances are that American students will be difficult and expensive to recruit. So why spend money chasing after them instead of, say, Korean students, when they all bring in the same amount of revenue?  You might of course just want American students because of the mix of experiences they bring to campus.  That’s fine – but you need to put a price tag on what that’s worth and limit your recruitment efforts accordingly.

In recruitment, every dollar is precious.  Institutions need to know their strengths and value propositions, and not chase every new market just because it’s new.

I agree with the broad tenor of Alex’s argument, but have some things to add.

The first thing to add is that Canadian universities (and Canada more generally) are terra incognita institutions (apart from McGill University, and then sometimes the University of Toronto and University of British Columbia) in a terra incognita country from a US high schooler’s perspective. This awareness factor is in no way correlated to the quality of the undergraduate education a student will acquire – it relates, in my personal opinion (as an academic living in a college town in the US for 12 years) to word of mouth via educated parents, many of whom value cosmopolitan urban contexts. In other words, Alex’s “maybe a dozen schools” is very optimistic in my view. Knowledge (or lack thereof) about Canadian universities reflects the remarkable lack of knowledge about Canada. School curriculum ignores Canada, as does the US media.  A few blips occur — most recently about the Keystone Pipeline and Toronto’s Mayor (cough cough…further comments from me censored) — but Canada is hockey, fishing, and for the elites Whistler-Blackcomb and Montréal. I’m generalizing, of course, via my perch here dealing with university-fixated parents in College Town WI/USA, but I’ve facilitated discussions about Canada with 500-800 students over the last several years and am confident in stating that Canada is terra incognita no question about it. I am no longer shocked about what US students don’t know, and just pleasantly surprised if they know something, anything (and is not their fault; blame the education system here and Canada’s unwillingness or inability to beam the CBC down south). 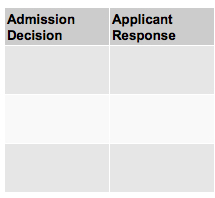 The second thing to note is that the timelines for applying to universities in Canada are significantly out of alignment with those in the United States.  US high school students, bound for college, often take tours of campuses in Gr. 10 and Gr. 11 and have decided, by the summer before Gr. 12, where they will apply to in the early fall. University application deadlines (Early Decision, Early Action, Regular Decision) via the Common Application, are earlier than in Canada (especially Ontario).  Most importantly, decisions about admission are made much earlier in the U.S. than in Canadian universities. And on a related note, U.S. universities are much better at stipulating the date decisions will be made, and at providing feedback on how (e.g., email, or downloaded PDF of letter, or letter in the mail) the decision will be communicated. They stick to the exact stated dates so you feel a sense of enhanced certainty during uncertain times. Rejections come with clear and well written letters that provides data on application volumes and admissions percentages, often situated in historic context. [And don’t forget these are not difficult to produce, or costly to disseminate – they are simple form letters made available, for the most part, via email or download sites. But they at least recognize that a student put a lot of effort into applying and was willing to alter life course to attend their university.] In contrast, many (not all) Canadian universities provided vague rolling windows about target decision deadlines. And I won’t start discussing how ineffective the Ontario Universities Application Center OUAC) website is – I mean, why imply decision outcomes will be communicated via it when they are not? The image above is a screenshot, taken today, of the OUAC page meant to communicate to my son about admissions decisions that were made by three Ontario universities some 1-1.5 months ago…perhaps the OUAC site is run by Mayor Ford’s office! [sorry]

The third reason Canada has an uphill climb to attract students is that the cost to attend a Canadian university is relatively high. Canadian universities have less scholarships to distribute unless you are a stellar student and once you add up the costs of international tuition fees and books, housing/food, and living (including air travel to and from Canadian cities), the costs are substantial, putting Canadian universities practically and psychologically (for parents) out of reach.  I’m not implying Canada needs to ramp up scholarship support for non-Canadians, but it is not as cheap as is often conveyed, especially with a broader, deeper, and more heterogeneous scholarship and tuition support (including via discounted rates) ecosystem in the US.

If Canada ever wants to attract more US students, I would agree with Alex Usher that institutions “need to know their strengths and value propositions.” But at the same time some not insignificant systemic changes need to be made regarding:

Alas there is not much Canada can do to improve how it is represented in the media down here, though I did note George Stroumboulopoulos (and CNN) flew the Canadian flag high last night…Strombo for Mayor?!