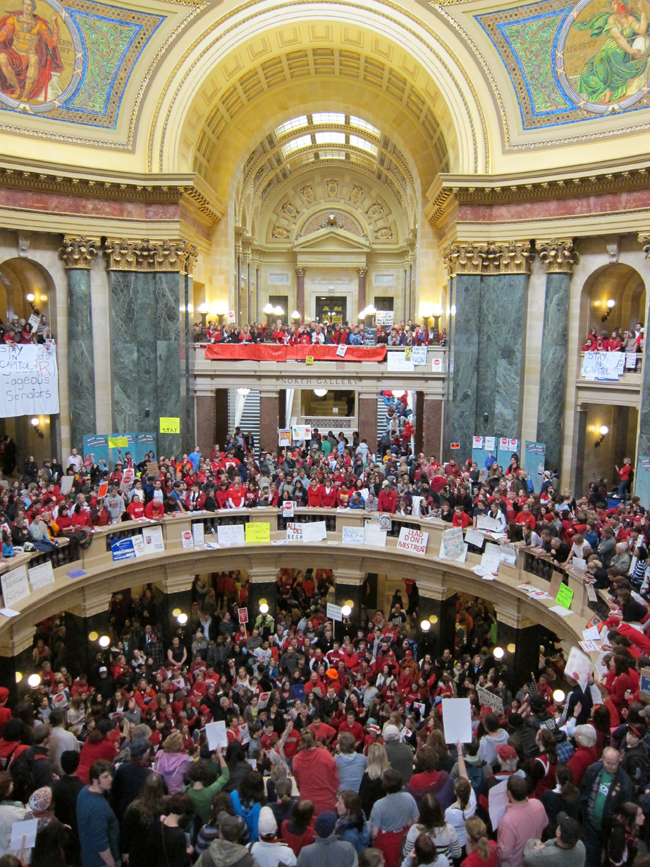 Editor’s note: this is a revised version of an earlier (16 February) entry in GlobalHigherEd.  It reflects my enhanced knowledge about what has been unfolding in Madison WI for the last several weeks.  This revised version was posted last week on our Inside Higher Ed mirror site. I stand by the analysis with a further week’s worth of reflection: indeed, the political atmosphere here has deteriorated quite severely in the last three days, almost to the level of farce mixed with brazen displays of political thuggery.

It is also worth noting that I have shifted the long list of links and videos in the original entry, and one follow-up entry, over to a stand-alone site called BadgerFutures.  BadgerFutures will be updated every 1-2 days, and is designed to act as a resource site for people engaged in debates about the so-called New Badger Partnership (NBP), and the inclusion of a formal proposal, within the 2011-13 state budget, to grant UW-Madison ‘public authority’ status.  This initiative will lead to the separation of UW-Madison from the University of Wisconsin System, and generate a wide array of impacts, not all of which have been determined.  Interestingly, the relatively high place of UW-Madison within world university rankings, and the need to maintain this position, has been used as an argument for why the NDB should be supported. Please link through to BadgerFutures if you are interested in following the evolution of the debate over the next several months.  These debates are relevant and interesting to engage in, but I am wary of making GlobalHigherEd too Madison-centric.  Kris Olds

It is not very common to see marches of tens of thousands of people in small cities like my hometown of Madison, Wisconsin (with a population of approximately 235,000 people). The issue that drew about 13,000 into the State Capital area on 15 February, 10-20,000 people on 16 February, 25,000 people on 17 February, 35-40,000 people on 18 February, 60-100,000 people on 19 February, and tens of thousands every subsequent day to the present moment, relates to the decision of the recently elected Republican Governor of Wisconsin (Scott Walker) to unilaterally remove the right of public sector unions to collectively bargain about employment-related benefits. The proposal also repeals, in perpetuity, the rights of some segments of society (including day care workers, faculty and academic staff) to collectively bargain at all, and will generate a defacto pay cut for all people associated with universities of 8+% if it proceeds.

As a Canadian who has lived in several countries generating regular surpluses, but WI resident and taxpayer since 2001, the State’s fiscal challenges are evident to me. However this ‘budget repair’ bill proposal is clearly underpinned not by a logical ‘share the pain’ approach, but by an ideologically-derived agenda regarding the posited rights (or not, in this case) of certain types of American citizens to engage in deliberations about their working arrangements and conditions. I can’t help but wonder how politicians who preach about democracy, human rights, and the value of a ‘small government’ approach, can rationalize an abrupt rebalancing agenda driven by defacto ‘big government’ approach that exudes surprising elements of authoritarianism and anti-democratic impulses. Isn’t this a deliberative democracy? Why no negotiations and civil dialogue via organized fora, speaking tours throughout the state with budgetary Q&A sessions, etc.? But, as E.J. Dionne of the Washington Post put it:

If this were just about normal budget cutbacks, the political earthquake we’re seeing in Wisconsin would not have happened. This is an effort by a temporary majority — I use the term because in a democracy, all majorities are, in principle, temporary — to rush a bill through the legislature designed to alter the balance of political power in the state.

Amazing, and a sign of the intersection of developmental debates at the state level with US-scale political currents regarding class politics, aspirational leadership positioning, and socio-economic networks (including the über rich/conservative Koch Brothers, and their organization Americans for Prosperity, as pointed out by the New York Times, Washington Post, and Mother Jones). Indeed the Koch Brothers have just opened up a lobbying office in Madison, and are launching, today, a $342,200 TV ad in support of Walker according to the Capital Times.

If these proposed changes proceed, the implications are profound and on a number of levels and scales, a point made by Governor Walker himself in the New York Times:

The images from Wisconsin — with its protests, shutdown of some public services and missing Democratic senators, who fled the state to block a vote — evoked the Middle East more than the Midwest.

The parallels raise the inevitable question: Is Wisconsin the Tunisia of collective bargaining rights?

Governor Walker, in an interview, said he hoped that by “pushing the envelope” and setting an aggressive example, Wisconsin might inspire more states to curb the power of unions. “In that regard, I hope I’m inspiration just as much as others are an inspiration to me,” he said.

This strategy is fundamentally dependent upon sowing the seeds of discontent between workers; something more easily done in a context of economic crisis and recession. This was certainly evident around the State Capital building on Saturday 19 February when I spent time listening to supporters of Walker lambasting other workers (for many of Walkers supporters were employees too, not employers) about the nature of their health care and pension benefit packages, and their ability to collectively bargain. The sad thing is this hoped-for inter-worker conflict, and defacto race downwards (in pay, benefits, and working conditions), is being encouraged by ostensible ‘leaders’ like Governor Walker. This is a cynical and short-sighted type of politics if there ever was one. But as Jeffrey Sommers rightfully points out in The Guardian on 22 February:

In short, it has been a return of the mean season. Briefly, in 2008, this frustration was directed against the Republicans. Yet, the Democrats delivered no tangible gains for labour since taking power then, and now, the right has helped steer working-class anger away from Wall Street and back to Main Street’s teachers and public employees. Deftly executed, private sector workers without benefits now blame workers who do have them as the cause of their deprivation. Instead of seeing the gains unions can deliver, private sector workers now take the lesson that these gains have somehow been taken at their expense – all the while ignoring the trough-feeding that continues unabated on Wall Street.

The new class war, as it is actually perceived, is not between workers and capital, but between private and public sector workers, with the fires generously stoked by the billionaire Koch brothers and rightwing money generally. One can only imagine Mr Burns of the Simpsons hatching such a scheme in caricature of capital; but this is real, and few seem to recognise the irony as they play out their scripted parts.

As noted above, the politics and political effects associated with the protests are growing, and getting connected to some stronger national and now international currents, not all of which are based upon a recognition of what is going on on the ground right now, with caricatures of all sorts being inaccurately drawn.

In the end, however it turns out, and regardless of political standpoint, it is important for all people to realize the important role, and strongly felt views, and breathtaking energy, of Madison’s university students, and their organizations (e.g., the ASM, Badger Herald, Daily Cardinal, TAA) in engendering critically important discussion and debate here. I really can’t say enough about their commitment, professionalism, good humor, empathy for older and very different types of people (e.g., union members from northern WI), and absolute grace under pressure. And while ‘off-the deep end’ ideologues like Indiana’s deputy attorney general urged police to use live ammunition against Wisconsin protesters (I’m sadly not joking), what will leave a lasting legacy, in ever so many minds, is the critically important role of students (both university and high schoolers) in shaping a window of February 2011 that is of genuine historic import.

In closing, here are four short videos that capture aspects of the university (and high school) student presence I noted above. The first three were produced by 22 year old Matt Wisniewski, and the third by PhD student Shahin Izadi. A fourth, by Madisonian Finn Ryan, focuses on the broader segments of society who have also been active, in an equally positive and constructive way, in conveying their dissatisfaction with the Walker agenda.

8 thoughts on “Protests, debates & grace under pressure in Madison, WI”