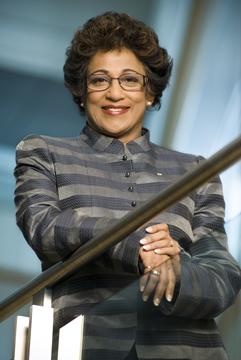 Editors’ note: today’s guest entry has been kindly developed by Indira V. Samarasekera, President and Vice-Chancellor, University of Alberta, Canada. Professor Samarasekera’s engaging entry is the eighth response to Nigel Thrift’s ‘A question (about universities, global challenges, and an organizational, ethical dilemma)‘, which was originally posted on 8 April 2010. The previous seven were provided by the people below and the entries can be linked to via their names:

Finally, please note that we will continue to welcome proposals for responses to Nigel Thrift’s ‘A question‘ through to the end of 2010.

Professor Samarasekera (pictured above) became Alberta’s 12th university president in 2005. Over a professional career spanning three decades, she has distinguished herself as one of Canada’s leading metallurgical engineers. As a Fulbright-Hays Scholar, she earned an MSc from the University of California in 1976, and, in 1980, she was granted a PhD in metallurgical engineering from the University of British Columbia.  She was awarded the Order of Canada in 2002 in recognition of outstanding contributions to steel process engineering. Professor Samarasekera is also Chair of the National Institute of Nanotechnology (NINT), and sits on the Board of Directors of the Bank of Nova Scotia (Scotiabank) and the Public Policy Forum of Canada.

I have been following with interest the initial entry in this series by Nigel Thrift and the responses that followed.  The internationalization of large, public research universities leading to more rapid research advancements that address what he terms the “long emergency” is a topic I am passionate about and explored in my opinion piece in Nature (‘Universities need a new social contract,’ 12 November 2009).

I agree with Professor Thrift that universities—and university researchers—must be the “primary intellectual fire-fighters” in the emerging global crisis which is unprecedented in complexity, universality, and potential for comprehensive devastation.  It’s time universities and the “nation-states” that consider us their “national assets” recognize our mutual ethical obligation to focus on both the short and long-term emergencies we see gathering force, however uncomfortable that may make our political or academic colleagues who might prefer to respond with semantics exercises or further retreat into their cloistered halls.

International collaborative engagement of public research universities in global issues is now imperative if we are ever to arrest any of the threats to nearly every field that sustains life on our planet: water quality, air quality, food production, sanitation, climate and environment, health and nutrition, disaster prevention and relief, land and sea wildlife preservation, energy resources and consumption, economic stability, international security, and more.

The contributions we can make—that our nations are expecting us to make—touch every area of our mission:  teaching, research, and service.  As many of the thought-provoking responses to Professor Thrift’s question noted, our paramount responsibility is preparing students to serve in the quest for solutions, whether as future development practitioners, as researchers, or simply as ethical, informed global citizens who care and support those on the front lines of humanitarian and scientific efforts.

Student and faculty exchanges, study abroad, international student recruiting, rescuing oppressed and threatened scholars, and advancing current curriculum offerings with creative new interdisciplinary global studies programs and program components—the human knowledge side of this equation—is indeed very important, primarily for the long run.  It is the upcoming generation that will have to face the accelerating consequences of the threats attracting our attention now.  All universities’ first organizational-ethical dilemma is to organize optimally to prepare learners to lead optimally effective initiatives in every challenged field worldwide.  Their lives and the lives of generations ahead depend on it.

But what will they have in their arsenal to strengthen what Professor Thrift calls their “war footing” if we don’t envision, fund, and facilitate—not only research, but the often more expensive push into development and application of scientific and technological discoveries into practical, effective solutions.  These are what workers on the front lines in future generations will need to arrest damage, repair and prevent future damage, and improve and sustain universal quality of life on our planet.

Which returns me to the importance of creating a new social contract around research that recognizes that we face a universal imperative for cross border research collaboration that challenges all nation-states to step up with their public and private universities, not just in North America, but around the world.

We need to get creative and follow the lead of many of our individual academic researchers, who are now collaborating across geographic and discipline boundaries to concentrate the best minds, research facilities, and joint initiatives on the big issues threatening global survival.

As Dr. Peter Stearns fears in his response, creation of this new social contract and ways to fund research and development yet to be done will “entail substantial investment.” That’s why we and our nation-states must collaborate to fund large, complex research programs that address the most threatening problems, where the global community must find solutions fast, and use of those solutions must span all borders.

At the University of Alberta, our founding promise of “uplifting the whole people” guides us in our ethical commitment to forge ahead toward our vision of a world of expedited interdisciplinary, inter-institutional, international research.  We have lit a fire under our former structural inertia and, over the past few years, have been trying some new things I would like to share.

So I return to Professor Thrift’s original questions:  “Are universities optimally organized to address the fundamental ‘global challenges’ that exist, and at the pace these challenges deserve to be addressed?  If not, what should be done about this organizational-ethical dilemma?”

The answer is “no,” but here are some examples of what we believe is moving The University of Alberta in the right direction.

In September 2009, the Helmholtz Association of German Research Centers and the University of Alberta established a five-year agreement creating the Helmholtz Alberta Initiative to combine their scientific research capabilities in tackling the environmental issues facing Alberta’s oilsands.

This initiative was the result of years of diplomatic and information sharing between University of Alberta leaders and academic researchers and their counterparts in Germany, the German government, German research universities, and German research centers.  From these years of conversations, common goals were identified, possibilities were defined, alignments were explored, and eventually graduate student and faculty exchanges, joint research projects, and collaborations with industry, both in Canada and Germany, were established and the initiative is well under way.

In fact, it is already expanding beyond the technological and environmental issues facing oilsands development—which  are also concerns for coal operations in both Alberta and Germany—to  include health sciences research initiatives.

As part of this partnership, in addition to the resources invested in the initiative by the University of Alberta and the Helmholtz Association, the Alberta government invested $25 million, which came from the Canadian federal government’s ecoTrust program.

This example demonstrates both the sophistication of effort, involving many levels of conversation from researchers to university leaders to heads of nation-states and the time required—years of delicate deliberations—to put together such a collaboration.  But it also demonstrates it can be done.

In addition to collaboration of nation-states, we have looked to international foundations and philanthropists to be partners in helping us fund research of international importance to our university, their mission, and the world.

In February 2010, the Li Ka Shing Canada Foundation gave us $28 million, the largest cash donation in our history, to establish the Li Ka Shing Institution of Virology. The power of this gift was amplified by $52.5 million in related funding from the Government of Alberta to help University of Alberta researchers in their quest to treat, cure, and prevent virus-based diseases worldwide.

Part of the foundation’s donation will extend the university’s connections to Shantou University Medical College, with the launch of the Sino-Canadian Exchange Program—a joint PhD program between the two medical schools.  With the creation of the institute, the University of Alberta joins the East West Alliance, a portal into a global network of medical research institutions including Stanford University, University of California-Berkeley, Oxford and Cambridge universities in the United Kingdom, and the Institut Pasteur in France, among others.

Like the Helmholtz Alberta Initiative, the funding, partnerships, aligning of objectives and resources, and establishment of inter-organizational trust (another dimension of the organizational-ethical dilemma) took years, involving many levels of conversation.  But again, it demonstrates that interdisciplinary, inter-institutional, internationally organized and funded collaborations can be done when a university establishes its international vision, communicates it well, and dedicates the institution’s will to achieving it.

I present these examples, not as a model or fait accompli but rather as an insight into a process the University of Alberta took to identify the infrastructure that we needed and put it to the test.  We began by defining a vision of what we thought might be done to build on decades of less formal relationships established between our nation-state, our administrative leaders, and our faculty leaders and credible representatives of the two countries:  Germany and China.

Once we were in agreement on our vision, we then asked: “ How will we get there?”  Like many large universities, our “international” emphasis to date had been primarily on recruiting students and faculty, both here and abroad, for undergraduate and graduate studies, research fellowships, faculty exchanges, and study abroad.

In all, we identified eight considerations that we had to address in order to move toward more optimal organization for reaching our goals.  Again, I don’t propose that University of Alberta has created the model.  However, I think it’s important for any university that wants to help shape the new social contract internationally to begin with these considerations, identify others that might apply  as well to its institution, and craft the specific vision and organization it needs for its international research collaborations to succeed.

6 thoughts on “A University of Alberta response to ‘A question (about universities, global challenges, and an organizational-ethical dilemma)’”