The denationalization of higher education – the process whereby developmental logics, frames, and practices, are increasingly associated with what is happening at a larger (beyond the nation) scale continues apace. As alluded to in my last two substantive entries:

this process is being shaped by new actors, new networks, new rationalities, new technologies, and new temporal rhythms. Needless to say, this development process is also generating a myriad of impacts and outcomes, some welcome, and some not.

While the denationalization process is a phenomenon that is of much interest to policy-making institutions (e.g., the OECD), foundations and funding councils, scholarly research networks, financial analysts, universities, and the like, I would argue that it is only now, at a relatively late stage in the game, that the higher education media is starting to take more systematic note of the contours of denationalization.

How is this happening? I will address this question by focusing in on recent changes in the English language higher education media in two key countries – the UK and the USA (though I recognize that University World News, described below, is not so simply placed).

From a quantitative and qualitative perspective, we are seeing rapid growth in the ostensibly ‘global’ coverage of the English-language higher education media from the mid-2000s on. While some outlets (e.g., the Chronicle of Higher Education) have had correspondents abroad since the 1970s, there are some noteworthy developments: 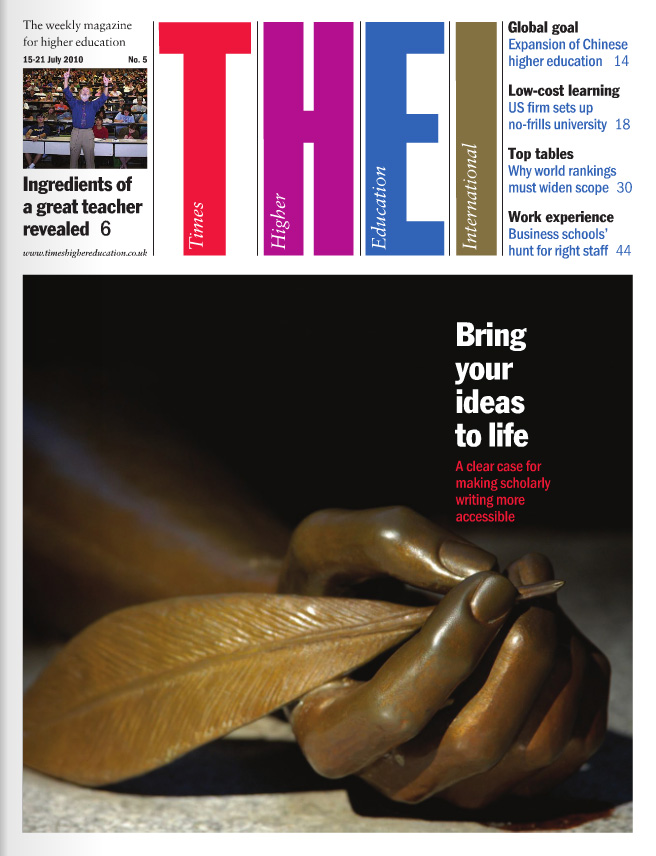 From a temporal and technological perspective, it is clear that all of these outlets are ramping up their capacity to disseminate digital content, facilitate and/or shape debates, market themselves, and build relevant multi-scalar networks. For example, I can’t help but think about the differences between how I engaged with the THES (as it used to be called) as a Bristol-based reader in the first half of the 1990s and now. In the 1990s we would have friendly squabbles in the Geography tea room to get our hands on it so we could examine the jobs’ pages. Today, in 2010, THE staffers tweet (via @timeshighered and @THEworldunirank) dozens of times per day, and I can sit here in Madison WI and read the THE website, as well as THE International, the moment they are loaded up on the web.

While all of these higher education media outlets are seeking to enhance their global coverage, they are obviously approaching it in their own unique ways, reflective of their organizational structure and resources, the nature of their audiences, and the broader media and corporate contexts in which they are embedded.

In many ways, then, the higher education media are key players in the new global higher education landscape for they shape debates via what they cover and what they ignore. These media firms are also now able to position themselves on top of hundreds of non-traditional founts of information via Twitter sources, select weblogs (some of which they are adopting), state-supported news crawlers (e.g., Canada’s Manitoba International Education News; Netherland’s forthcoming NUFFICblog; the UK’s HE International Unit site and newsletter), cross-references to other media sources (e.g., they often profile relevant NY Times stories), and so on — a veritable BP oil well gusher of information about the changing higher education landscape. In doing so, the higher education media outlets are positioning themselves as funnels or channels of relevant (it is hoped) and timely information and knowledge.

What are we to make of the changes noted above?

In my biased view, these are positive changes on many levels for they are reflective of media outlets recognizing that the world is indeed changing, and that they have an obligation to profile and assist others in better understanding this emerging landscape. Of course these are private media firms that sell services and must make a profit in the end, but they are firms managed by people with a clear love for the complex worlds of higher education.

This said there are some silences, occlusions, and possible conflicts of interest, though not necessarily by design. 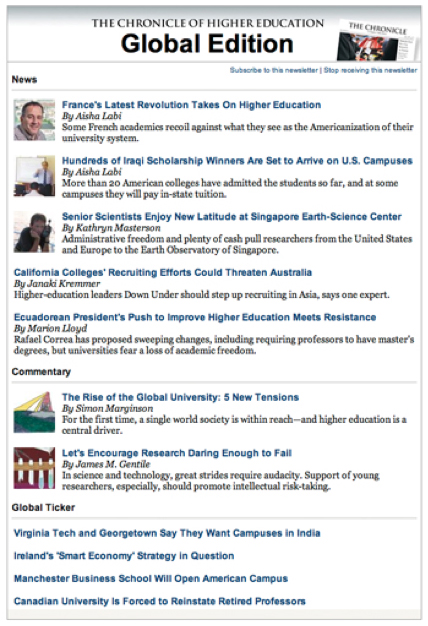 First, English is clearly the lingua franca associated with this new media landscape. This is not surprising, perhaps, given my selective focus and the structural forces at work, but it is worth pausing and reflecting about the implications of this linguistic bias. Concerns aside, there are no easy solutions to the hegemony of English in the global higher education media world. For example, while there is no European higher education media ‘voice’ (see ‘Where is Europe’s higher education media?‘), if one were to emerge could it realistically function in any other language than English given the diversity of languages used in the 47 member country systems making up the European Higher Education Area?

Second, these outlets, as well as many others I have not mentioned, are all grappling with the description versus analysis tension, and the causal forces versus outcomes focus tension. Light and breezy stories may capture initial interest, but in the end the forces shaping the outcomes need to be unpacked and deliberated about.

Third, the diversification strategies that these media outlets have considered, and selectively adopted, can generate potential conflicts of interest. I have a difficult time, for example, reading Washington Post-based stories about the for-profit higher education sector knowing that this newspaper is literally kept afloat by Kaplan, a major for-profit higher education firm. And insights and effort aside, can THE journalists and editors write about their own rankings, or other competitive ranking initiatives (e.g., see ‘’Serious defects’ apparent in ‘crude’ European rankings project’), with the necessary distance needed to be analytical versus boosterish? I’ll leave the ‘necessary distance’ question for others to reflect about, and assume that this is a question that the skilled professionals representing the Washington Post and the THE must be grappling with.

Finally, is it possible to provide The World View, be WorldWise, or do justice to the ‘global’, in a weblog or any media outlet? I doubt it, for we are all situated observers of the unfolding of the global higher education landscape. There is no satellite platform that is possible to stand upon, and we are all (journalists, bloggers, pundits, academics, etc.) grappling with how to make sense of the denationalizing systems we know best, not to mention the emerging systems of regional and global governance that are being constructed.

All that can be done, perhaps, is to enhance analytical capabilities, encourage the emergence of new voices, and go for it while being open and transparent about biases and agendas, blind spots and limitations.

Note: my sincere thanks to the editors of the Chronicle of Higher Education, Inside Higher Ed, Times Higher Education, and University World News, for passing on their many insights via telephone and email correspondence.  And thanks to my colleagues Yi-Fu Tuan and Mary Churchill for their indirectly inspirational comments about World views this past week. Needless to say, the views expressed above are mine alone.

3 thoughts on “Are we witnessing the denationalization of the higher education media?”