In the middle of checking with colleagues at a variety of peer institutions about the evolving nature of teaching loads, yesterday’s New York Times distracted me with two fascinating articles about forces that are pushing educators and researchers to work with both smaller and larger groups of people.

On the downward push side, the article ‘At M.I.T., Large Lectures Are Going the Way of the Blackboard’ by Sara Rimer, explores how physicists at universities across North America are:

The article, which primarily focuses on MIT and the discipline of physics, notes that students still take basic introductory classes, but:

today they meet in high-tech classrooms, where about 80 students sit at 13 round tables equipped with networked computers.

Instead of blackboards, the walls are covered with white boards and huge display screens. Circulating with a team of teaching assistants, the professor makes brief presentations of general principles and engages the students as they work out related concepts in small groups.

Teachers and students conduct experiments together. The room buzzes. Conferring with tablemates, calling out questions and jumping up to write formulas on the white boards are all encouraged.

The article reminded me of a day I spent in the Wharton School‘s lavish building at the University of Pennsylvania (see the pictures below, taken in 2005).  I was impressed with the dialogue-oriented classrooms, and the small semi-private meeting spaces for student teams in the hallways (to the left of the corridor) with more public computer desks on the opposite side; spaces clearly designed from the ground up. 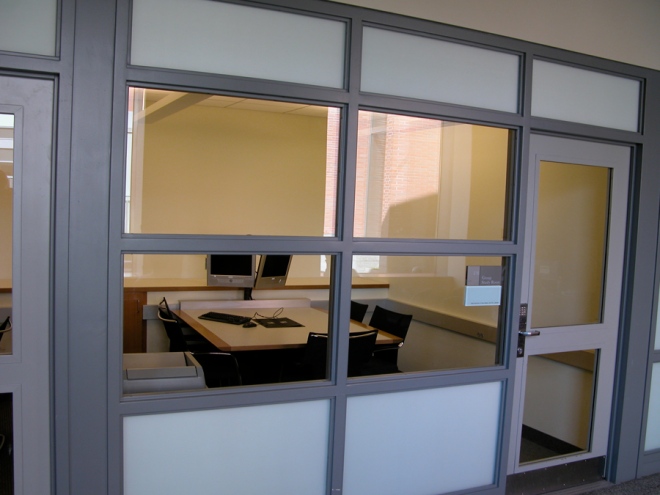 ‘At M.I.T., Large Lectures Are Going the Way of the Blackboard’ resonates with debates underway in numerous quarters about the learning process, classroom technologies, pedagogical practices, and so on. Yet one cannot help but wonder how the effects of the current economic crisis will restrain most public universities from moving in this logical direction, one that our institutions have long known about (witness the praise for colleges like Harvey Mudd), yet have resisted or been unable to act upon.  Indeed, as I noted to one of my colleagues in Minnesota yesterday, long term underfunding of public higher education systems generates structural forces that see faculty-student enrollment number balances tilt the exact opposite way – away from small group quality learning – as witnessed in Australia and Canada in the 1980s and 1990s (see some indicators here in ‘Analysing Australia’s global higher ed export industry’). MIT and Penn have the resources to do the right thing, but does the average university in most continents?

The 13 January issue of the same New York Times included a guest column by Aaron E. Hirsh titled ‘A New Kind of Big Science’. This article, which is also getting a lot of attention, discusses what Hirsh deems a “very broad trend” in scientific research: the creation of huge international teams of researchers, and associated research infrastructures, that are enabled by the forces of centralization:

Across many different fields, new data are generated by a smaller and smaller number of bigger and bigger projects. And with this process of centralization come changes in what scientists measure — and even in what scientists are.

It’s not only scientific instruments, but also the scientists themselves who are transformed by centralization. If the 19th century was an age of far-flung investigators alone in the wilderness or the book-lined study, the 21st century is, so far, an age of scientists as administrators. Many of the best-known scientists of our day are men and women exceptionally talented in herding the resources — human and otherwise — required to plan, construct and use big sophisticated facilities.

In a way, centralization seems unavoidable. The governments that fund research have themselves become far more centralized, so perhaps science has been pulled along in the process. But even without that prevailing wind, science would, I think, head in the very same direction.

A young discipline is bound to move first through the data it can gather most easily. And as it does, it also defines more exactly what it must measure to test its theories. As the low-hanging fruit vanish, and the most precious of fruits are spotted high above, bigger investments in harvesting equipment become necessary. Centralization is a way to extend scientists’ reach.

I quote at length, here, for he raises some important issues worth pondering for those interested in the construction of new knowledge spaces. These include:

Hirsh’s column, especially his idea of a national initiative in Citizen Science – to complement Big Science – in the US, has generated 100+ comments, some of which are insightful.

In closing, I can’t help but note that both pushes – smaller groups of people when teaching, and larger groups of people when researching – require greater, not less, social engagement, and of both virtual and face-to-face forms. Resource constraints aside, do we have the quality institutions, structures, technologies, programs, etc., in place, and knowledge about them, to enable and facilitate better quality social engagement in the local spaces of the classroom, and the broader spaces of Big Science?  Citizen Science might help resolve some problems associated with Big Science, yet we are arguably lacking up-to-date support systems to enable us to engage better, to be better partners, in the worlds of teaching and research.

In a future entry I’ll come back to the issue of inter-university consortia and associations (e.g., the US’ Committee on Institutional Cooperation) in providing one element of these needed support systems. Enough procrastination for today though…I have syllabi to finish writing!