The UK, the world’s second largest provider of higher education services for foreign students (see context graphic below from the OECD’s Education at a Glance 2007), has just released new data up to the 2006/2007 academic year. Some key enrolment and graduation points, according to the Higher Education Statistics Agency (HESA):

The Guardian reports that the UK Minister of State for Lifelong Learning, Further and Higher Education, Bill Rammell, views the increasing dependency of UK universities upon foreign students in a positive way, such that the:

Universities UK conveyed a view that these trends “demonstrated the UK to be one of the leading international destinations for students looking for a quality higher education experience”. 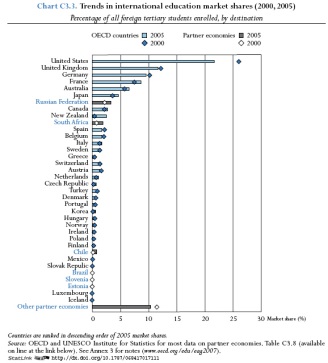 Dependency and risk? Expansion of the education services sector and generation of export earnings? Supplement to state-provided resources and diversification of institutional revenue streams? Supplement (aka gap filler) to stalled flows of students (due to “top-up fees”) from the UK? Builder of non-UK capacity via the provision of a ‘quality’ education to non-UK students? Brain drain/brain gain/brain circulation mechanism? All of the above to varying degrees depending on what interpretive perspective is adopted. Regardless, though, the UK is continuing to act as one of the world’s most influential and significant providers of higher education services to non-UK EU students, and to non-EU students, who have the capacity to cross borders in the goal of enhancing their qualifications and experiencing life in another country. The UK is also, curiously, an awkwardly placed ‘player’ in conceptual and policy-making debates about the emerging European Higher Education Area (EHEA), the stated goal to make the EHEA a key driver of Europe’s knowledge economy in accordance with the Lisbon Stategy, and the emerging goal of forging an ‘external dimension‘ to the EHEA. More about the latter issue this Spring in GlobalHigherEd.
Kris Olds