If higher education is becoming a global ‘industry’ then it is inevitable risks and rewards will be differentially dispersed, and subject to the turbulence generated by broader structural forces, including global financial machinations. The most tangible of these forces relate to currency exchange rate differentials given that overseas students often pay high fees, and that key market players have come to depend upon these fees to compensate for declining state support (with Australia and the UK apt examples).

Further to my 11 October entry titled ‘Will shifting currency exchange rate differentials (2005-2007) redirect flows of foreign students?’, which appears to be relatively interesting for some viewers of this blog judging on the basis of hit counts, today’s Financial Times has inspired me to revisit this issue. The FT’s article, titled ‘Drop in foreign students may hit universities’, quotes University College London’s provost (Malcolm Grant) as saying the strength of the sterling might damage (in financial terms) his institution (which depends upon 20% of its students to generate overseas fees of between £11,000 and £22,000 per annum). Let’s look at a few relevant numbers in the following graphics.

First, here are the currency exchange rates (1 January 2002 to yesterday via the Pacific Exchange Rate Service) with reference to a British Pound-based indicator, with the UK’s main competitor (the US) noted, as well as the two main sources of foreign (and non-EU) students to the UK’s higher education system. 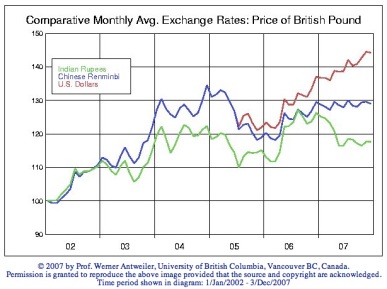 Now let’s look at the relative dependency of the UK on foreign students in general, and from specific countries. These three graphics are from the OECD’s Education at a Glance 2007 report that we also profiled in September 2007.

As these three graphics note UK universities are heavily dependent upon foreign students, especially from China and India (and Asia more generally).

Finally here is a graphic from a report we profiled on 18 September that is from a new British Council and Education UK report that attempts to identify the “value of educational exports” (using trade in services parlance) to the UK economy. 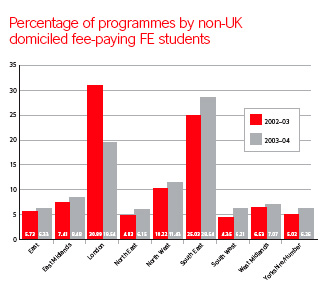 So dependency upon foreign students in the UK is clear, as is a fast rising and troublesome (for foreign students) British Pound. And given the patterns in this table (that admittedly only focus on England) are likely to be at work today, what we are seeing in Malcolm Grant’s expressed concern is one geographically- and institutionally-specific view on this broader structural dynamic.

But if demand stalls at the prestigious London institution, which attracts large numbers of foreign students, other British universities are likely to be affected in the same way.

If he is right, the British economy will be hit. Foreign students provide millions of pounds in invisible exports. Prof Grant said they were also “a major engine for economic growth” because many stayed on and found a job after finishing their studies, contributing to the economy as highly skilled workers.

International undergraduates – defined by British universities as students from outside the EU – also play an important role in boosting the revenues of several of Britain’s elite universities. These include University College, London, ranked the world’s ninth best university in the Times Higher Education Supplement’s league table.

Thus segments of the UK higher education system, and select parts of the country (mainly the Southeast and London), are now creating the noteworthy aggregate figures that the OECD has identified. If so is it not incredibly risky to engender such dependencies given the broad array of roles such universities (and regions) play in society and economy? Compete UK universities feel they must, but on the backs of ever so many fee paying foreign students? The UK’s competitor and model – the USA – is dependent upon foreign students too, though more on a sector- and profession-basis versus such a system-wide basis. And even when leading US universities (e.g., Harvard, Stanford, USC), depend upon relatively large proportions of foreign students they are at much less risk for most are institutions that are also sitting on top of vast reserves in the form of multi-billion dollar endowments as discussed here and here (not to mention being well resourced via external research funding). Does the UK really want to create and enhance such a high level of risk in such a critically important pillar (the publicly-funded higher education system) of society and economy? Or can branding, the perception (and reality, in most cases) of a high quality education, and the persistence of socio-economic networks that funnel students to the UK, mediate the currency effects?