This week GlobalHigherEd has been running a series of in-depth reports on the battle for market share of higher education. Our reports draw from a major study released last week by the Observatory of Borderless Higher Education (OBHE) on International Student Mobility: Patterns and Trends. The Observatory report identifies four categories: (1) Major Players; (2) Middle Powers; (3) Emerging Destinations, and (4) Emerging Contenders.

Today we look at the third category – ‘Evolving Destinations’.

Japan, Canada and New Zealand are viewed as evolving destinations with 5%, 5% and 3% respectively of market share. Between them, these 3 have around 13% (or 327,000 of the 2.7 million in total) of global market share (compared with 45% for the Major Players and 20% for the Middle Powers). The reason for the OBHE report locating these 3 countries into this category is that:

For instance, in Japan’s case, 63% of Japan’s international students come from China (74,292) with only a small distribution (aside from South Korea who send 15,974) from around the Asian region. In order to boost numbers and widen distribution, the Japanese government has tasked a subcommittee of the Education Rebuilding Council with the job of finding more than 1 million by 2025. Making Japan more attractive as a destination will be achieved by teaching more courses in English, a more flexible system of credit transfer system, and more funding for foreign scholars. No doubt Japan will also be intrigued by the Bologna Process as one strategy that Europe has pursued to this end.

Canada has 5% of market share, and rising, benefiting from the visa problems facing students entering the USA since September 11. Canada, however is dependent upon only a few source countries; for instance it recruits a high proportion of South Korean students (19% of total overseas enrollments). However, it has faced declining numbers of students coming from Japan, China and Hong Kong. It would interesting to follow this case more closely, as Canada has a very high standard of living and competitive student fees. There is a suggestion that the fact that there is not have a strong central (Federal) government initiative to position it as a global player, as in the case of Australia, is a strategic weakness (see also our recent report on Canada).

New Zealand owns around 3% of market share and in the peak years, it has had as much as 10%. However, since 2004, NZ has experienced negative growth, fed by a decline in the numbers of students coming from China. What are the causes of the decline? The OBHE report notes:

In comparison with the rest of the major host nations, New Zealand has a limited higher education capacity with only eight publicly funded institutions and lower brand visibility …[and] with a rising exchange rate the country may not be the low cost destination it is at present.

In order to overcome problems of visibility and ‘brand’ recognition, the New Zealand government have developed their own brand images and marketing strategies – around what they call ‘Brand New Zealand’. 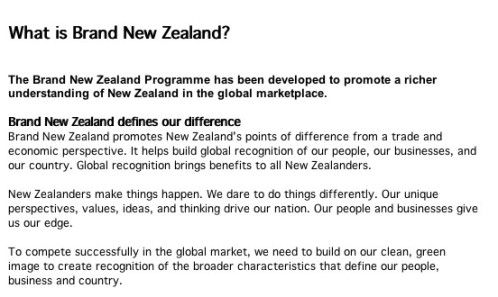 What we learn from the case of these 3 ‘Evolving Destinations’ is that they have to operate in a very sophisticated and potentially volatile market. Diversifying the number of source countries is one strategy. However, this cannot overcome local issues of capacity (NZ), or problems associated with the organization of political systems (Canada).

However, it will be particularly interesting to see what happens to Japan’s higher education system over the next decade. One thing for sure is that while China is a major importer for the moment, any intentions that it has of reversing this and becoming an attractive destination itself will cause a major headache for most of the players in the global higher education field.